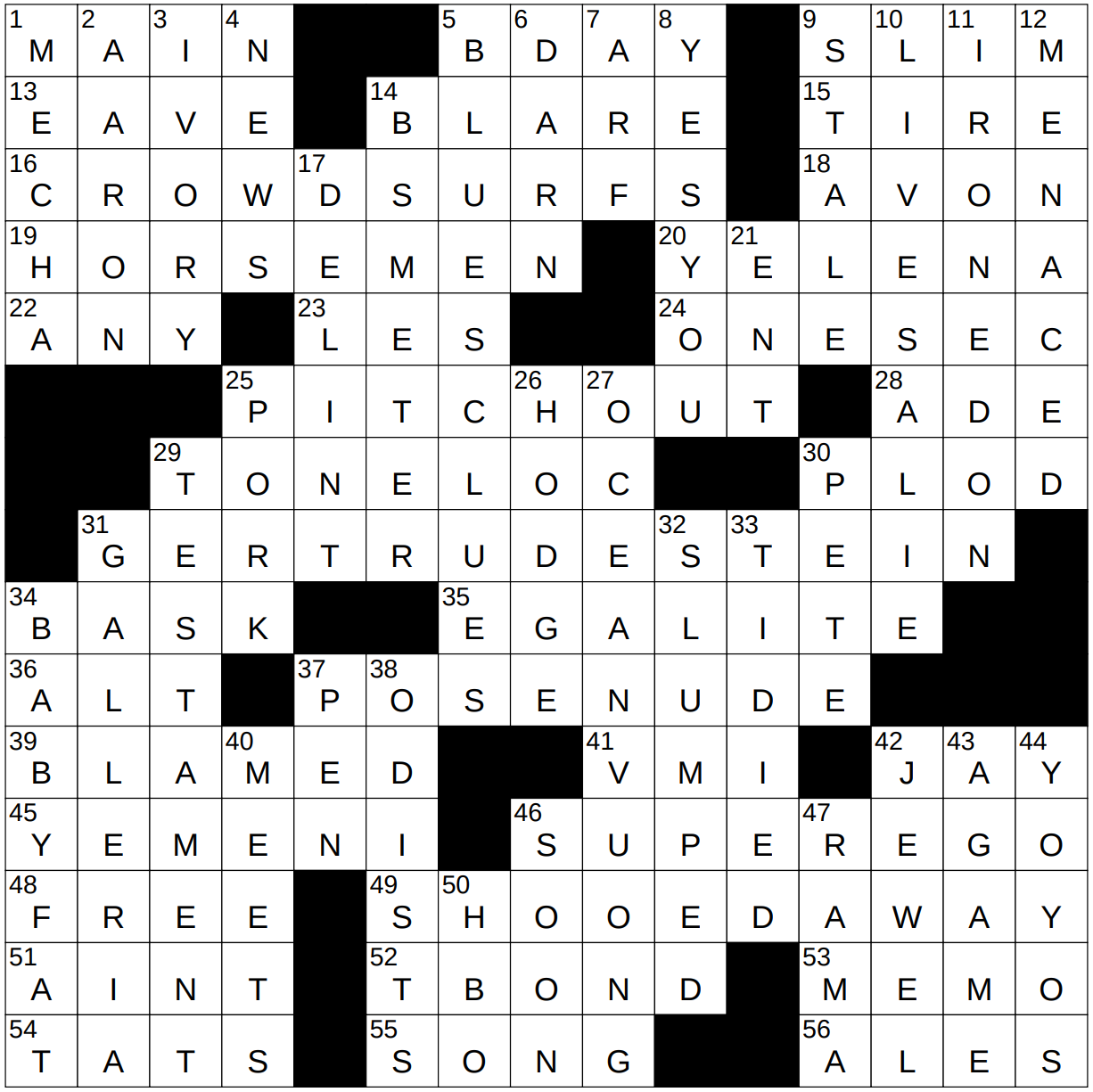 Constructed by: Natan Last
Edited by: Will Shortz

A boombox is a portable music player with speakers that includes an AM/FM radio as well as a recording device (originally cassette tapes, and later compact discs). The first boombox was introduced by Philips in 1966 as a “Radiorecorder”, a portable device that could record radio broadcasts without the need to use external cables and microphones. Boomboxes became very popular with young people in urban areas. The practice of playing loud music using boomboxes in neighborhoods led to the devices being labeled as “ghetto blasters”.

Florence Pugh is an English actress whom I best know from playing Amy March in the 2019 big-screen adaption of the novel “Little Women”. Younger members of the viewing audience might recognize her for playing Yelena Belova in the film “Black Widow” and the related TV series “Hawkeye”. In 2019, Pugh started a relationship with fellow actor Zach Braff (who played the lead in “Scrubs”).

Aix-les-Bains is an old Roman spa town in Eastern France.

Tone Lōc is the stage name of rapper Anthony Smith.

“Égal” (feminine “égale”) is a French word meaning “equal, alike” that we sometimes use in English. The national motto of France is “Liberté, égalité, fraternité”, meaning “Liberty, equality, fraternity”.

37 What Rose decides to do for Jack in “Titanic” : POSE NUDE

When James Cameron made his epic movie “Titanic”, released in 1997, it was the most expensive film ever made and cost about $200 million. It was a good investment for the studio as it became the highest-grossing film of all time, bringing in over $1.8 billion. “Titanic” remained the highest-grossing film until 2010, when Cameron eclipsed the prior record with “Avatar”.

The Virginia Military Institute (VMI) is one of the six senior military colleges in the country, and is located in Lexington, Virginia. The sports teams of VMI are known as the Keydets, southern slang for “cadets”.

The bird known as a “jay” is sometimes called a “magpie”, although the terms are not completely interchangeable.

Mocha is a port city in Yemen on the Red Sea and was once the principal port for the capital city of Sana’a. Mocha was the major marketplace in the world for coffee until the 1600s, and gave its name to the Mocha coffee bean, which in turn gave its name to the mocha brown color, and the flavor of coffee infused with chocolate.

46 Part of the mind that is “like all propagandists, relentlessly repetitive,” per Adam Phillips : SUPEREGO