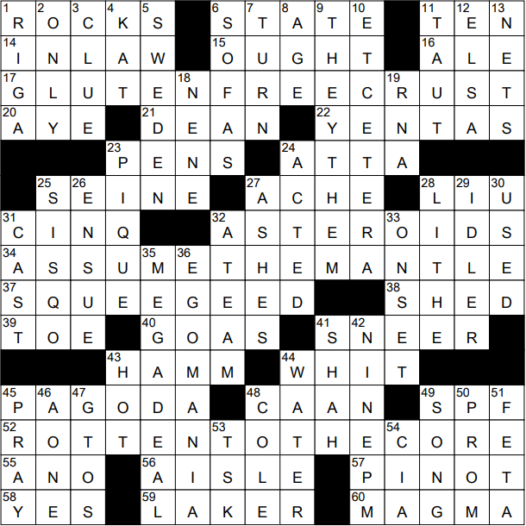 Today’s Theme (according to Bill) What, Lava?

Themed answers each end with one of the Earth’s geological layers. And, the grid starts with ROCKS and ends with MAGMA:

11 Number of provinces in Canada : TEN

23 Products of Pilot and Bic : PENS

There are 37 bridges spanning the River Seine in Paris, including 5 pedestrian-only bridges and 2 rail bridges.

“Charlie’s Angels” is a fun action movie from 2000 that is a spin-off from the iconic TV show of the same name from the seventies. The “Angels” in the movie version are Cameron Diaz, Drew Barrymore and Lucy Liu, with Bill Murray as John Bosley. John Forsythe provides the voice of the unseen “Charlie”, just as he did in the original television show.

34 Take on a position, along with its responsibilities : ASSUME THE MANTLE

Someone who assumes the mantle takes on the leadership role that was once held by someone else. The original mantle was a loose, sleeveless cloak. The phrase itself originated in the Bible, which tells of the prophet Elijah leaving behind his cloak when he ascended into heaven. Elisha picked up Elijah’s mantle, and assumed Elijah’s role as prophet.

37 Cleaned, as a window : SQUEEGEED

The first squeegee was known as a “squilgee”, and was used to wash fish blood and scales off the decks of fishing vessels.

James Caan ad-libbed the phrase “bada-bing” when portraying Sonny in the classic 1972 film “The Godfather”. Years later, the writers of the TV mobster series “The Sopranos” used the name “Bada Bing!” for the fictional strip club in which Tony Soprano hangs out with his cronies.

49 Letters on a bottle of tanning lotion : SPF

52 Lacking any moral compass : ROTTEN TO THE CORE

The Earth’s core is divided into two zones, a relatively solid inner core and a liquid outer core. Both inner and outer cores are composed mainly of iron and nickel. It is believed that the Earth’s magnetic field is generated by electric currents created by convection currents in the outer core.

60 What lava is before an eruption : MAGMA

5 Land between Norway and Finland : SWEDEN

“Shah” was a title used by Persian emperors that translates into English as “king”. The full title in Persian is “Sahahsah”, which means “King of Kings”.

“J. Cole” is the stage name of American rap artist Jermaine Cole. J. Cole was born in Germany, on the US Army base in Frankfurt.

“Zero Dark Thirty” is a film directed by Kathryn Bigelow that tells of the long but ultimately successful hunt for Osama bin Laden. I found one aspect of this film to be particularly uplifting, namely the central role played by a remarkable CIA officer who was a woman operating against the odds in a man’s world.