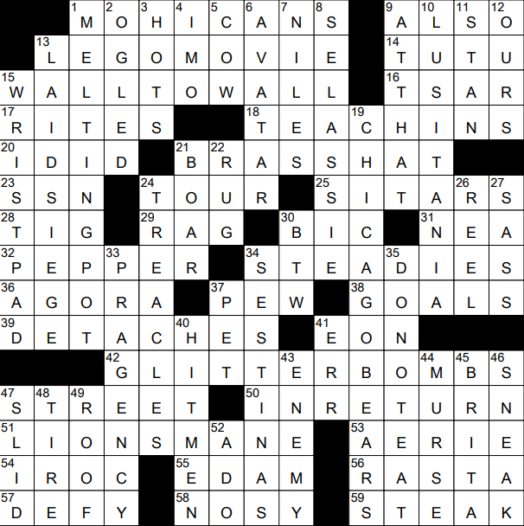 13 2014 animated film whose protagonist, aptly, is a construction worker, with “The” : LEGO MOVIE

14 It sticks out in a dance studio : TUTU

Anoushka Shankar is a British sitar player, and is the daughter of Indian sitar virtuoso Ravi Shankar. Through her father, Anoushka is also the half-sister of American singer Norah Jones.

30 Brand whose logo includes a schoolboy with a ball for a head : BIC

The letters “EON” appear in “SECOND”.

“Lion’s mane” is a common name for the edible mushroom Hericium erinaceus. The common name arises from the mushroom appearance as it grows in clumps of dangling spines that might resemble the mane of a lion.

55 Cheese whose name is a semordnilap : EDAM

A semordnilap is a word that becomes a different word when spelled backwards. “Semordnilap” is “palindromes” in reverse.

“Edam” is “made” spelled backwards.

56 One celebrating Grounation Day, which commemorates a visit by 8-Down : RASTA

Red Hots are cinnamon-flavored candy pieces. I recently found out that Red Hots are sometimes used in apple sauce …

8 Ethiopian emperor revered by 56-Acrosses : SELASSIE
(56A One celebrating Grounation Day, which commemorates a visit by 8-Down : RASTA)

10 Its destruction marked a turning point in World War I : LUSITANIA

The RMS Lusitania was a Cunard ocean liner that was sunk off the coast of Ireland in May 1915 during WWI. The Lusitania was on its traditional route between Liverpool and New York City, having departed New York six days before the sinking. She was attacked by a German U-boat, with 1,198 of the 1,959 people on board being killed. The main result of the sinking was to turn public opinion against Germany, greatly contributing to the US entering the war.

34 Some works by Petrarch : SESTINAS

A sestina is a poetic form consisting of six stanzas with six lines in each stanza. Although still in contemporary use, the sestina dates back to around 1200.

Petrarch (Francesco Petrarca) was an Italian scholar and poet who lived during the Renaissance. Petrarch gave up his vocation as a priest, and soon after spotted a woman named Laura in his church in Avignon, France. He was so taken by Laura that he wrote many poems dedicated to her. He later clarified that he could not approach Laura with his feelings, as she was a married woman.

40 Ones who are sent packing? : HITMEN

Perfect is the enemy of good.

44 Portmanteau for a messenger bag : MURSE