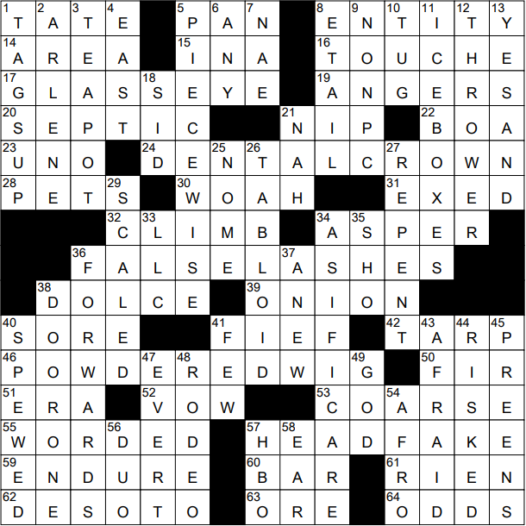 Constructed by: Sophie Buchmueller & Ross Trudeau
Edited by: Will Shortz

Themed answers are each something FAKE associated with the HEAD:

Ina Garten is an author as well as the host of a cooking show on the Food Network called “Barefoot Contessa”. She is a mentee of Martha Stewart, and indeed was touted as a potential “successor” to the TV celebrity when Stewart was incarcerated in 2004 after an insider trading scandal. Garten has no formal training as a chef, and indeed used to work as a nuclear policy analyst at the White House!

“Touché” is a term from fencing, one acknowledging a successful “touch” in a duel. The usage has been extended to mean that a successful criticism or riposte has hit home in a conversation.

A septic tank is a sewage system that resides locally beside a house, on the property i.e. “on-lot”. The term “septic” is used generally to describe anything related to the anaerobic decomposition of organic matter, often with the emission of foul-smelling gases. Septic tanks usually rely on anaerobic bacteria to break down the solid waste that settles.

1 Prepares to score on a sac fly : TAGS UP

Arlene is a pink stray cat who is fond of the title character in the “Garfield” comic strip by Jim Davis. Garfield is pretty rude to Arlene though, and often makes fun of the gap in her teeth.