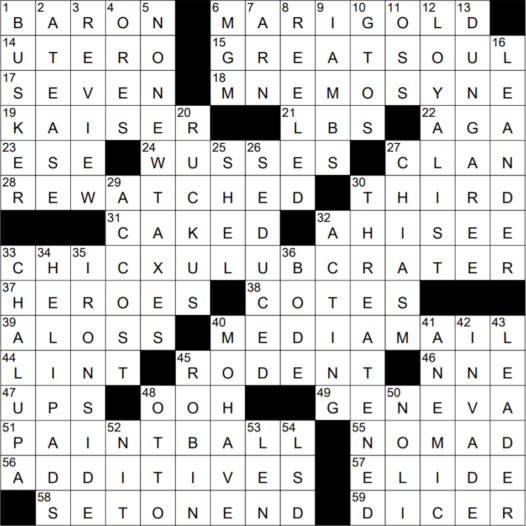 Constructed by: Adam Simon Levine
Edited by: Will Shortz

“Kaiser” is the German word for “emperor”. The term is usually applied to the Emperors of the German Empire or Deutsches Reich that started with Kaiser Wilhelm I in 1871 and ended with the abdication of Kaiser Wilhelm II after the Empire’s defeat in WWI.

21 Abbr. in a birth announcement : LBS

30 Like Seth, among the offspring of Adam and Eve : THIRD

The capybara is the largest rodent in the world, and a native of South America. This huge animal is related to the tiny little guinea pig, a remarkable relationship given that a fully grown adult capybara can be over four feet long, and weigh up to 140 pounds.

The city of Richmond is the capital of the Commonwealth of Virginia. The original town was named in 1737 after the English town of Richmond that is now part of London. British planter William Byrd II thought that view of the James River was reminiscent of the view of the River Thames from England’s Richmond Hill.

51 Sport with a “capture the flag” variety : PAINTBALL

Peggy Noonan is an author and columnist, and was once a speechwriter for President Ronald Reagan. Noonan was responsible for one of President Reagan’s most-remembered speeches, when he addressed the nation after the Space Shuttle Challenger disaster. She also came up with some famous phrases used by President George H. W. Bush, such as “a kinder, gentler nation”, “a thousand points of light” and “read my lips; no new taxes”.

9 There are 70 in a Shakespearean sonnet : IAMBS

13 It may be in your jeans : DUNGAREE

Author Shel Silverstein had a varied career and did a lot more than write books. Silverstein was a poet, composer, cartoonist and screenwriter among other things. One of his successful children’s books is “A Light in the Attic”, a collection of poems that was first published in 1981. Some parents have tried to get the book banned from libraries. The collection includes the poem “How Not to Have to Dry the Dishes”, which encourages disobedience and making a mess. Scandalous …

A chalupa is a Mexican dish consisting of a tostada shaped into a “cup” and filled with various ingredients. “Chalupa” translates from Mexican Spanish as “small boat”.

“Ironside” is a classic police television drama that first ran from 1967 to 1975. Star of the show is Raymond Burr playing the partially paralyzed former Chief of Detectives Robert T. Ironside. Ironside was forced to retire from the SFPD when he was shot by a sniper, but ended up as special consultant to the police department.

40 County that’s split in two by the Grand Canyon : MOHAVE

Robin Roberts has been the anchor of ABC’s “Good Morning America” (GMA) since 2005, prior to which she was a sportscaster on ESPN for 15 years.

“Noli me tangere” is Latin for “touch me not”. The words are the Latin translation of “cease holding on to me” written in Greek in the Gospel of John. They are words spoken by Jesus to Mary Magdalene after his resurrection.