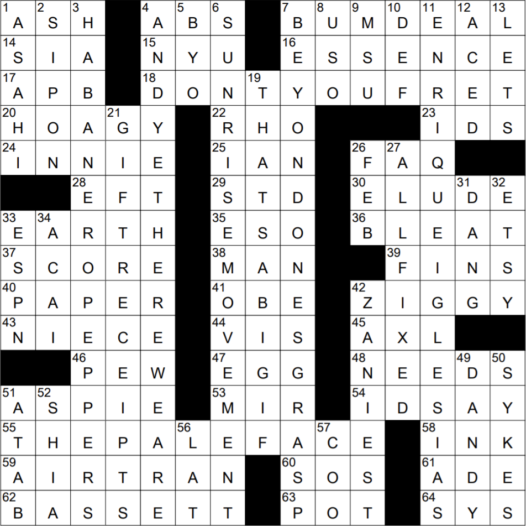 Constructed by: Sean Yamada-Hunter
Edited by: Will Shortz

THAT’S A BIG “IF” made with black squares in the center of the grid.

14 Pop singer known for performing in a face-obscuring wig : SIA

Singer-songwriter Hoagy Carmichael was born Hoagland Howard Carmichael. Carmichael’s remarkable first name was given to him in honor of a circus troupe called “The Hoaglands” who stayed at the Carmichael house during his mother’s pregnancy. Now that’s a story …

Gandalf is an important character in the J. R. R. Tolkien novels “The Hobbit” and “The Lord of the Rings” trilogy. He is a wizard known as Gandalf the Grey during his lifetime, and as Gandalf the White after he returns from the dead.

AirTran Airways was a budget airline that has its principal hub in Atlanta. The company was founded in 1993 as ValuJet Airlines. AirTran had been owned by Southwest Airlines since 2011 and was fully integrated into the parent company in 2014, when the AirTran brand was shelved.

62 Actress Angela of “How Stella Got Her Groove Back” : BASSETT

“iOS” is what Apple now calls their mobile operating system. It was previously known as iPhone OS.

11 Performer known as the “King of Latin Pop” : ENRIQUE IGLESIAS

42 Most out there : ZANIEST

Something that is a dandy or a oner is remarkable or outstanding.

Wanda Sykes is a very successful American comedian and comic actress. Interestingly, Sykes spent her first five years out of school working for the NSA. I saw her perform in Reno some years ago, and she is very, very funny.

Bahrain is an island nation located off the coast of Saudi Arabia in the Persian Gulf. Bahrain is connected to Saudi Arabia by a series of causeways and bridges that were constructed in the eighties.