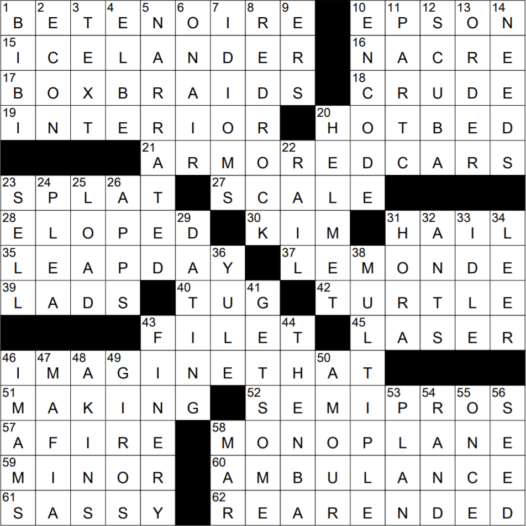 “Inkjet” is a very accurate and descriptive name for the type of printer. Printing is accomplished by shooting extremely fine jets of ink onto the page.

15 The singer Björk,for one : ICELANDER

“Le Monde” is a newspaper published each evening in France. It is one of the two most famous French papers, along with “Le Figaro”.

Sarah Vaughan was a jazz singer from Newark, New Jersey. The future winner of a Lifetime Achievement Grammy had a humble start to her career, singing and playing the piano at Newark Airport.

Milton Friedman was a noted American economist and winner of the Nobel Prize for Economics in 1976. Friedman was an advisor to President Ronald Reagan and was very much an advocate of a free market system with limited intervention by governments.

8 Component of many sandstone features in the Southwest : RED ROCK

Sandstone is a sedimentary rock. When sandstone is subject to heat and pressure it can turn into metamorphic rock called quartzite.

Medicare is a national medical insurance program administered by the US government. The term “Medicare” originally applied to a government program introduced in 1956 that provided coverage for families of those serving in the military. The current Medicare program was introduced by the Johnson administration in 1966, to provide health insurance to anyone aged 65 years or older.

12 Apparatus with a harness and flippers : SCUBA

Flippers! Any diver worth his or her salt would say “fins”, and certainly not “flippers” …

The New Orleans Hornets joined the NBA in 1988 as an expansion team, originally based in Charlotte, North Carolina. The team was going to be called the Charlotte Spirit, but the name was changed following a “name the team” contest run in the local area. During the Revolutionary War, Lord General Cornwallis had referred to Charlotte as a “veritable nest of hornets” due the city’s resistance to British occupation, which explains the local fans’ fondness for the name “Hornets”. The franchise was moved to New Orleans for the 2002 season, as attendance wasn’t big enough to sustain the team in Charlotte. The team had to play two seasons in Oklahoma City due to damage caused by Hurricane Katrina, and played as the New Orleans/Oklahoma City Hornets. After several years back in New Orleans, the franchise was renamed to the Pelicans, a nod to the Brown Pelican that is the Louisiana state bird.

Claude Akins was an actor from Nelson, Georgia. Although Akins acted in many Hollywood films, he is best remembered for playing Sheriff Lobo in the seventies TV show “B. J. and the Bear”.

An autogyro (sometimes “autogiro”, or simply “giro”) is an aircraft that uses an unpowered rotor to create lift, and a powered propeller to provide thrust. The first autogyro was flown in 1923 in Spain, where it was invented.

In Spanish, “España” (Spain) is a country on “el Mediterráneo” (the Mediterranean).