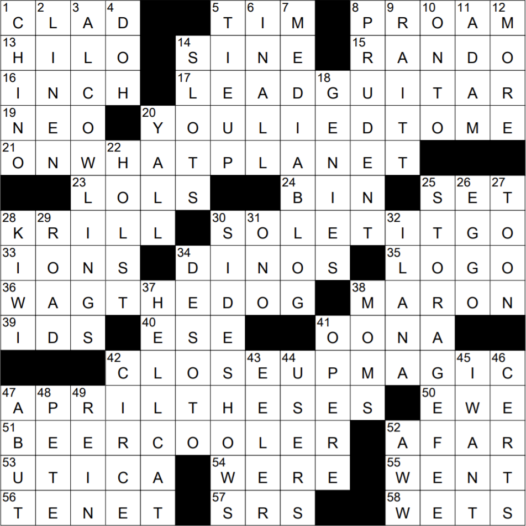 Krill are small, shrimp-like crustaceans that live in the oceans. Krill feed on plankton, and in turn, krill are the main part of the diet of larger animals such as whales, seals and penguins. There’s an awful lot of krill in the world, an estimated 500,000,000 tonnes of it. That’s about twice the biomass of humans on the planet!

An ionic bond is formed between two oppositely-charged ions. A common example is the bond between positively-charged sodium atoms and negatively-charged chlorine atoms to form table salt (NaCl). A covalent bond, on the other hand, is formed when two atoms share electrons. Atoms sharing electrons tend to be stable, so they prefer to stay together rather than apart.

The Mohawk Valley is a region in New York state located between the Adirondack and Catskill Mountains. Centered on the Mohawk river, the area includes the cities of Schenectady, Utica and Rome.

John Raitt was an actor and singer best known for his roles in Broadway musicals such as “Carousel”, “Oklahoma!” and “The Pajama Game”.

18 Beings made from smokeless fire, in the Quran : GENIES

26 Brand whose last letter is in the shape of its product : EGGO

Christchurch is the third most-populous city in New Zealand (after Auckland and Wellington, the capital). Christchurch is also the largest city on New Zealand’s South Island. The city is named for Christ Church, the Oxford college attended by Irishman John Robert Godley who founded the Canterbury region of New Zealand.

Ilana Glazer is a comedian from Long Island, New York. Glazer is the co-creator of the Comedy Central sitcom “Broad City” along with comedian Abbi Jacobson.

34 Old automaker with the models Firedome, Fireflite and Firesweep : DESOTO

I’m not sure this clue is correct. As far as I know, the Hellcat was a carrier-launched aircraft, and not an aircraft carrier.

The F6F Hellcat was the mainstay carrier-borne aircraft for the US Navy during WWII. The Hellcat also saw service with the British Fleet Air Arm under the Lend-Lease Act.

“Sneaky Pete” is a slang term for cheap fortified wine that is often associated with down-and-outs sleeping rough on skid row.