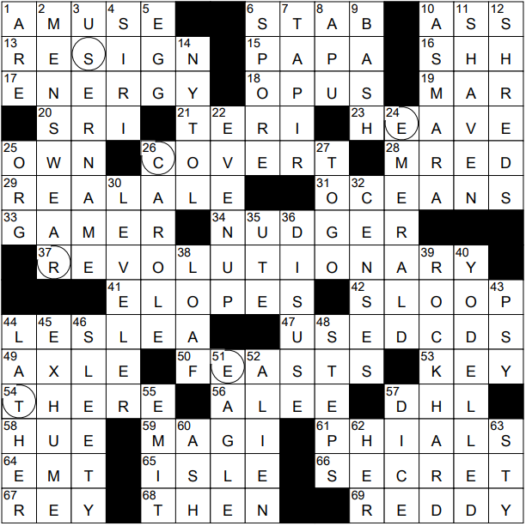 A vandal is someone who destroys something beautiful or valuable. The term “vandal” comes from the Germanic tribe called the Vandals who sacked Rome in the year 455. Our contemporary term “vandalism” was coined by Henri Grégoire in 1794, when he was describing the destruction of artwork during the French Revolution.

“Real ale” is a relatively contemporary term. It has been used in the UK since 1973 to refer to beer that has been brewed traditionally, and that does not use extraneous carbonation. I am a huge, huge fan of real ale …

33 One playing with a mouse, maybe : GAMER

“Heather Has Two Mommies” is a 1989 children’s book by feminist author Lesléa Newman. It is recognized as a pioneering piece of children’s literature, one of the first to depict a lesbian relationship.

56 On the sheltered side, nautically : ALEE

Alee is the direction away from the wind. If a sailor points into the wind, he or she is pointing aweather. The sheltered side of an island, for example, might be referred to as the “lee” side.

7 Mammal with a prehensile proboscis : TAPIR

A proboscis is a long appendage attached to the head of an animal, and is sometimes referred to as an elongated “nose”. Many an insect has a proboscis, as does an elephant.

8 Kwik-E-Mart proprietor on “The Simpsons” : APU

Asmara is the capital and largest city in Eritrea. The same city is known locally as “Asmera”.

Eritrea is a country located in the Horn of Africa, and surrounded by Sudan, Ethiopia, Djibouti and the Red Sea. Some scientists believe that the area now known as Eritrea was the departure point for anatomically modern humans who first left Africa to populate the rest of the world.

Nytol is a brand name for the drug diphenhydramine which is primarily used as an antihistamine. The drug also has a strong hypnotic effect and is used by some people as a non-prescription sleep aid.

Not only is Carole King a highly successful recording artist and performer, she is recognized by many as perhaps the greatest American female songwriter. Many of her earlier hits were co-written with her first husband Gerry Goffin. King’s life and career is celebrated in the marvelous stage show “Beautiful: The Carole King Musical”, which I highly recommend.

27 Country on the Gulf of Guinea : TOGO

32 Perfumes with a thurible : CENSES

A thurible is a device that holds burning incense. It is a metal chamber at the end of a long chain and plays a big part in many Christian ceremonies.

The Great Basin is a large region of the US covering most of Nevada, much of Utah and some parts of Idaho, Wyoming, Oregon and California. The 200,000 square mile area drains internally, with all precipitation sinking underground or flowing into lakes. Most of the lakes in the Great Basin are saline, including the Great Salt Lake, Pyramid Lake and the Humboldt Sink.