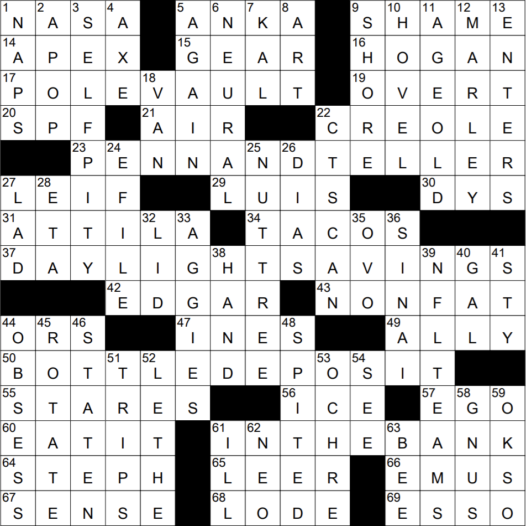 Constructed by: Zachary David Levy
Edited by: Will Shortz

Today’s Reveal Answer In the Bank

Themed answers each end with something one might find IN THE BANK:

16 Hulk in a wrestling ring : HOGAN

“Hulk Hogan” is the stage name (well, “ring” name) for wrestler Terry Gene Bollea. Hogan was big in the eighties and nineties. He fell out of public favor in 2015 when tapes of him making repeated racist remarks were published.

17 Olympic event for which the world record stands at a little over 20 feet : POLE VAULT

The pole vault has been an Olympic event for men since the 1896 games. However, women’s pole vaulting was only introduced at the 2000 games.

22 One of Haiti’s two official languages, along with French : CREOLE

“Creole” is the term used in Haiti to describe all of the native people, as well as the music, food and culture of the country. 80% of the Haitian Creole people are so-called black creoles, descendants of the original Africans brought to the island as slaves during the French colonial days.

The illusionist Teller, of Penn & Teller, was born Raymond Teller in Philadelphia, although has legally changed his name to simply “Teller”. Teller decided not to speak during his performances way back in his youth. He was doing magic at college fraternity parties and discovered that by remaining silent the potentially rowdy audience focused on his act and refrained from throwing beer at him!

Penn Jillette is one half of the duo of magicians known as Penn & Teller (Penn is the one who talks). Penn teamed up with Teller on stage in 1981, having met him through a friend back in 1974. As well as being talkative onstage, Penn is very vocal offstage when it comes to his causes and beliefs. He is a devout atheist, a libertarian and a supporter of free-market capitalism.

Leif Erikson (sometimes “Ericson”) was a Norse explorer and the first European to land in North America, some 500 years before Christopher Columbus’s landing in 1492. The Norsemen named the area they discovered “Vinland”, which might translate as “Wine Land” or “Pasture Land”. Erikson built a small settlement called Leifsbudir, which archaeologists believe they have found in modern day Newfoundland, at L’Anse aux Meadows. The settlement discovered in Newfoundland is definitely Norse, but there is some dispute over whether it is actually Erikson’s Leifsbudir.

Edgar Allan Poe (EAP) lived a life of many firsts. Poe is considered to be the inventor of the detective-fiction genre. He was also the first notable American author to make his living through his writing, something that didn’t really go too well for him as he was always financially strapped. In 1849 he was found on the streets of Baltimore, delirious and in dire need of medical help. Poe died a few days later in hospital at 40 years of age.

49 Any member of NATO to any other : ALLY

The Esso brand has its roots in the old Standard Oil company as it uses the initial letters of “Standard” and “Oil” (ESS-O). The Esso brand was replaced by Exxon in the US, but ESSO is still used in many other countries.

Kal Kan is a brand of pet food that has been marketed since 1936, but is now sold exclusively in Walmart stores.

12 Bob who sang “One love, one heart / Let’s get together and feel all right” : MARLEY

“Almond” is the name of a deciduous tree, and of the edible seed of that tree. The fruit of the almond tree is a drupe, and not a nut. The drupe comprises an outer hull surrounding a woody endocarp. The edible seed is found inside the woody shell, and that’s the almond “nut”.

36 Peninsula in the Six-Day War : SINAI

39 Two of them meet every year in the Super Bowl : NFL TEAMS

52 River of forgetfulness, in myth : LETHE