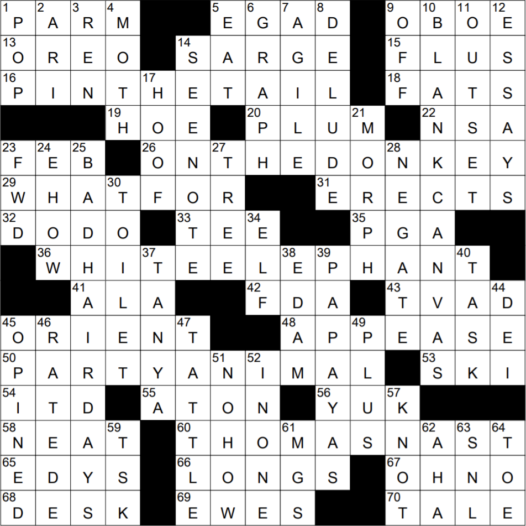 Constructed by: Alina Abidi
Edited by: Will Shortz

Bill’s time: 14m 11s (still getting used to the online solving app, and frustrated as a result)

1 Breaded and topped with tomato sauce and mozzarella, for short : PARM

13 Black-and-white item in a sleeve : OREO

National Oreo Cookie Day is March 6th each year. There is an urban legend that the particular day was chosen as this was the day that the name “Oreo” was registered as a trademark. However, that’s not the case. The application was filed on March 14, 1912 and registration took place on August 12, 1913. So, who knows why it’s March 6th?

18 Part of the food pyramid : FATS

20 Fruit in the William Carlos Williams poem “This Is Just to Say” : PLUM

William Carlos Williams was somewhat unique as a poet, in that he also worked full time as a pediatrician and general practitioner. Williams was a graduate of the University of Pennsylvania and never gave up his medical practice, even when he earned recognition in the world of literature.

32 Bird that had no natural predators until humans arrived : DODO

The dodo was a direct relative of the pigeon and dove, although the fully-grown dodo was usually three feet tall. One of the reasons the dodo comes to mind when we think of extinction of a species, is that it disappeared not too long ago (last recorded alive in 1662) and humans were the reason for its demise. The dodo lived exclusively on the island of Mauritius and when man arrived, we cut back the forests that were its home. We also introduced domestic animals, such as dogs and pigs, that ransacked the dodo’s nests. The dodo was deemed to be an awkward flightless bird and so the term “dodo” has come to mean a dull-witted person.

35 Babe Zaharias was the first woman to compete on its tour, in brief : PGA

Babe Zaharias was an American all-round athlete who won two track and field gold medals in the 1932 Summer Olympics in Los Angeles. She then became a professional golfer, and won ten LPGA majors. And in the world of baseball, Zaharias holds the record for the farthest baseball throw by a woman.

We use the idiomatic term “white elephant” to describe an object or venture that costs more to maintain than can be gained by disposing of it. The term comes from the tradition of presenting a white, albino elephant to a Southeast Asian monarch. Such a beast was a blessing, in that it was viewed as sacred and a sign of great power. It was also a curse, in that the animal was of no practical use and was expensive to maintain. The derivative phrase “white elephant gift exchange” refers to a party game in which impractical gag gifts are exchanged, usually at Christmas.

Thomas Nast was an American caricaturist and cartoonist. He was the creator of the Republican Party elephant, the Democratic Party donkey, Uncle Sam and the image of the plump and jocular Santa Claus that we use today.

eHow is a how-to website that was founded in 1999. eHow has an awful lot of content but doesn’t do a great job of assessing the value of that content. I wouldn’t recommend it …

30 Half of a half-bathroom : TOILET

The Babybel brand of cheese was launched in 1952 by the Bel Group, a multinational supplier of cheese that is headquartered in Paris. Babybel cheese is sold in distinctive packaging. It comes in a netted bag, with small pieces of the cheese encased in red wax with an outer cellophane wrapper. That’s a lot of packaging for a small amount of cheese …

39 Fruits whose seeds can act as a substitute for black peppercorns : PAPAYAS

63 Show with the recurring character Target Lady, in brief : SNL