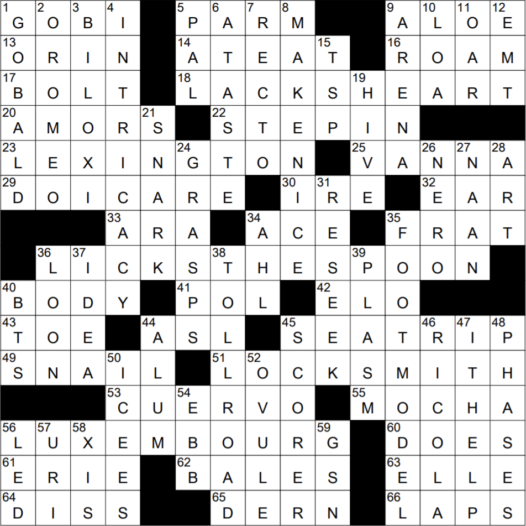 Today’s Theme (according to Bill) Lacks to Lux

Themed answers start with a vowel progression surrounded by L and an X-sound:

To bolt is to move suddenly, and especially to run away. The verb derives from the fast-moving bolt (the arrow) shot by a crossbow.

41 One running for office, for short : POL

The title song of the 1980 movie “Xanadu” was performed by the Electric Light Orchestra (ELO) and Olivia Newton-John (who starred in the film). Despite the popularity of ELO around the world, the song “Xanadu” was the band’s only number-one hit back in their homeland of the UK.

44 Means of communication in “A Quiet Place,” in brief : ASL

55 Mix of coffee and chocolate : MOCHA

Buffalo is the second-most populous city in the state of New York. The city takes its name from Buffalo Creek that runs through the metropolis (although the waterway is called Buffalo River within the city). The source of the name Buffalo Creek is the subject of much speculation, but one thing is clear, there were never any bison in the area.

Author Cheryl Strayed has written several successful books, most notably her 2012 memoir “Wild: From Lost to Found on the Pacific Crest Trail”. “Wild” was adapted into a 2014 film starring Reese Witherspoon as Strayed. I haven’t seen the film yet, but my wife has and really enjoyed it …

3 Mississippi city on the Gulf of Mexico : BILOXI

7 Right-hand page of a book : RECTO

A tandoor is a cylindrical clay or metal oven used in cuisines from several Asian locales, including India.

36 Bird on the Canadian dollar : LOON

Ricola is a Swiss brand of cough drops and breath mints.

47 Need after a computer crash, informally : IT HELP

As we all remember from botany class (don’t we?), an ovule is a small structure in many plants that develops into the seed after fertilization.

The geographical region of New England comprises the six northeastern states of Connecticut, Maine, Massachusetts, New Hampshire, Rhode Island, and Vermont. The name “New England” was given to the region by English explorer John Smith in 1616, just a few years before the Mayflower arrived in 1620.

58 Letters between nus and omicrons : XIS