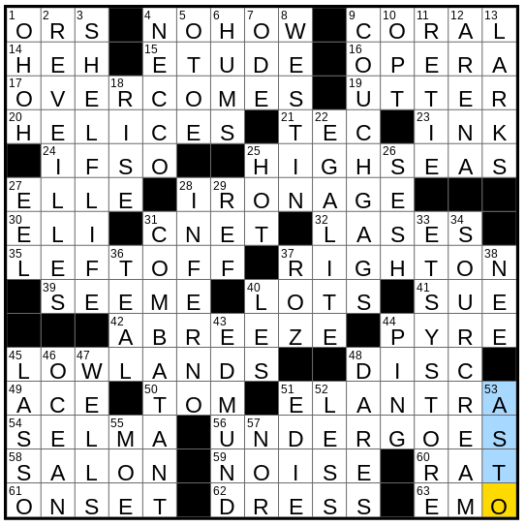 Themed answers come in pairs of two-part phrases. Both parts of one element are the opposite of both parts of the other element:

1 Places where surgeries are performed, for short : ORS

The peculiarly American term “nohow” means “not at all”. It comes from the words “no” and “how” constructed in the same way as the earlier word “nowhere”.

9 Composition of many reefs : CORAL

I’m a bit jaded with big stage musicals I must admit, but I will always have time for Andrew Lloyd Webber’s masterpiece “The Phantom of the Opera”. “Phantom …” is the longest running musical in the history of Broadway, and deservedly so. There is a sequel, titled “Love Never Dies”, that opened in London’s West End in March 2010. But, it hasn’t been well received.

The plural of “helix” is “helices”.

A private eye is a private investigator, a PI, a private “I”.

28 Period in human history after bronze was supplanted in toolmaking : IRON AGE

40 Divisions of a subdivision : LOTS

Those would be lots on which one might erect houses.

3 Twinkies have a long one : SHELF LIFE

Necco Wafers were the best-known product line of the candy manufacturer called the New England Confectionery Company. The firm’s name was abbreviated to “NECCO”, an acronym that became synonymous with the wafers.

A venue is a specified locale used for an event. The term “venue” came into English via French from the Latin “venire” meaning “to come”. So, a “venue” is a place to which people “come”.

13 Birds that do things just for the fun of it? : LARKS

Larks are small songbirds that are found all over the world, although only the horned lark species is found here in North America. Despite their size, larks are sometimes considered game birds, and can be served up as food. It’s not uncommon to find a dish containing lark meat in southern Europe.

18 What good soufflés do : RISE

29 One tweeting about football? : REF

“Enchilada” is the past participle of the Spanish word “enchilar” meaning “to add chili pepper to”. An enchilada is basically a corn tortilla rolled around some filling and then covered in chili pepper sauce. The term “big enchilada” is used in the same way as we would use “big cheese” i.e. the top dog. The phrase was popularized in the sixties when John Ehrlichman refers to Attorney General John Mitchell as “the big enchilada” on one of the Watergate Tapes.

Roz Chast had her first cartoon published in “The New Yorker” in 1978, and has had more than 800 published since then.

Scientists have been using radio waves to detect the presence of objects since the late 1800s, but it was the demands of WWII that accelerated the practical application of the technology. The British called their system RDF standing for Range and Direction Finding. The system used by the US Navy was called “Radio Detection And Ranging”, which was shortened to the acronym “RADAR”.

“Dogie” (sometimes “dogy”) is cowboy slang for a motherless calf in a herd.

The earliest known mention of the name “Atlantic”, for the world’s second-largest ocean, was in ancient Greece. The Greeks called said ocean “the Sea of Atlas” or “Atlantis thalassa”.

55 Leader of the Three Stooges : MOE