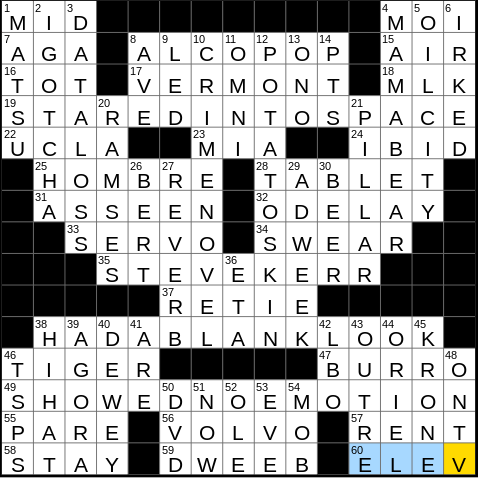 Today’s Theme (according to Bill) A Stolid Puzzle

Themed answers are expressions meaning “stolid, poker-faced”. We also have some grid art, with the black squares defining a “poker face”:

Alcopops are flavored alcoholic drinks, with the term being a portmanteau of “alcohol” and “pop”. Examples are Smirnoff Ice, Bacardi Breezer, and Jack Daniel’s Hard Cola.

Ibid. is short for the Latin word “ibidem” and is typically found in footnotes and bibliographies. Ibid. is used to refer the reader to the prior citation, instead of giving the same information all over again (title, author etc.).

35 N.B.A. great with five championship rings as a player and three as a head coach : STEVE KERR

56 Brand with the record for a single car driven the most miles (3+ million and counting) : VOLVO

Volvo is a Swedish manufacturer of cars, trucks and construction equipment. The Volvo name was chosen as “volvo” is Latin for “I roll”.

Denali’s summit stands at 20,310 feet, making it the highest mountain peak in North America. Denali means “the high one” in the native Athabaskan language. The peak was known as Mount McKinley for many years, named in 1896 for future president William McKinley. The state of Alaska changed the name back to Denali in 1975, and the federal government followed suit in 2015.

4 One whose porridge was too cold for Goldilocks : MAMA BEAR

Pennsylvania’s Oil City was once a settlement known as Oil Creek Furnace. That settlement grew up around an iron foundry erected in 1824. The area’s fortunes originally depended on local iron deposits, but that started to change in 1859 with the drilling of the first successful oil well. Soon after, in 1862, the name “Oil City” was adopted. The city was destined to become the headquarters of several motor oil companies, including Pennzoil and Quaker State.

Gorky Park is an amusement park notably in Moscow, but also in several other Russian cities. The park is named for Maxim Gorky, a Russian author. Famously, the park was featured in the novel and film called “Gorky Park”.

26 Muppet with a unibrow : BERT

“Krone” translates into English as “crown”, and was the name given to coins that bore the image of the monarch in several countries. Today, the krone is the name given to the currency of Norway, and of Denmark. Some of the Norwegian and Danish kroner have holes in the middle, giving them a “doughnut” or “torus” shape.

“Killing Eve” is a spy thriller series about an MI5 agent on the trail of a female assassin. The agent is played by Canadian actress Sandra Oh, and the assassin by English actress Jodie Comer. The storyline comes from a series of novellas titled “Codename Villanelle” by British author Luke Jennings.