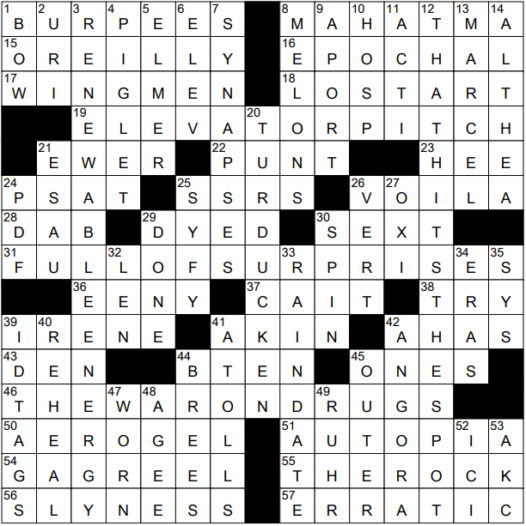 Bill’s time: 15m 53s (the online solving app is less of an issue later in the week)

Something described as epochal, relates to an epoch, a memorable period of time. An extended meaning of “epoch” is “highly significant, earth-shattering”.

36 Start of some decision-making : EENY …

“I Am Cait” is a documentary series that follows Caitlyn Jenner after she changed her gender and identification from Bruce Jenner.

38 Rugby equivalent of a touchdown : TRY

Our game bingo is a derivative of an Italian lottery game called “Il Giuoco del Lotto d’Italia” that became popular in the 16th-century.

The nation’s first president, George Washington, is on the US one-dollar bills produced today. When the original one-dollar bill was issued in 1863, it featured a portrait of Salmon P. Chase, President Abraham Lincoln’s Secretary of the Treasury.

Aerogel is an extremely low density material that is used as a thermal insulator.

55 Actor in the “Fast & Furious” franchise, familiarly : THE ROCK

“The Fast and the Furious” (also “Fast & Furious”) is a series of action movies about street racing and car heists. The original 2001 film spawned several sequels, making it Universal Pictures most successful franchise of all time.

K2 is the second highest mountain on the planet (at 28, 251 ft), with Mount Everest being higher by over 700 feet. Located on the China-Pakistan border, K2 is known as the “Savage Mountain” as it is relatively difficult to climb. 1 in 4 mountaineers who have attempted to reach the summit have perished. It had never been climbed in winter until relatively recently (in 2021 by a team of Nepalese climbers). The name K2 dates back to what was called the Great Trigonometric Survey, a British survey of the geography of India carried out during the 19th century. Included in this survey were the heights of many of the Himalayan peaks, including Everest. The original surveyor, Thomas Montgomerie, included two peaks he first called K1 and K2. He discovered later that the locals called K1 Masherbrum (the 22nd highest mountain in the world), but the remote K2 had no local name that he could find, so it was christened Mount Godwin-Austen. This name was rejected by the Royal Geographic Society although it does still appear on some maps. So, the most common name used is K2, that original notation in a surveyor’s notebook.

Althea Gibson was known as “the Jackie Robinson of tennis” as she broke the “color barrier” and became the first African-American woman to win a Grand Slam title, in France in 1956. She was quite the athlete and was a great golfer as well as a great tennis player. She was the first African-American woman to play in the Ladies PGA tour, although she never had a win. Outside of sport, she sang a little and recorded an album, and even appeared in a movie (“The Horse Soldiers”) with John Wayne and William Holden. Sadly, towards the end of her life she ended up destitute and on welfare. When her plight was made known in a tennis magazine, well-wishers from all over the world sent her gifts of money, a total of nearly one million dollars. Quite a story …

Drew Brees is a quarterback who played for the San Diego Chargers before signing with the New Orleans Saints in 2006. On top of his success in the NFL, Brees was an excellent tennis player in his youth. In one competition, he actually beat a young Andy Roddick who later became the world’s number one.

The Ruhr is a large urban area in western Germany. The area is heavily populated, and is the fifth largest urban area in the whole of Europe, after Istanbul, Moscow, London and Paris. The Ruhr became heavily industrialized due to its large deposits of coal. By 1850, the area contained nearly 300 operating coal mines. Any coal deposits remaining in the area today are too expensive to exploit.

53 Org. with a pedigree registry : AKC