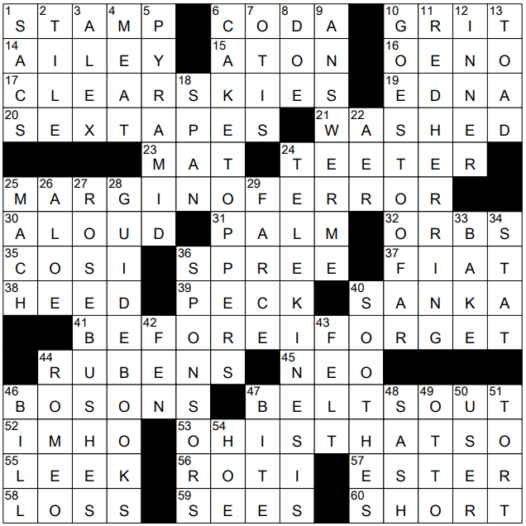 14 Choreographer who posthumously received the Presidential Medal of Freedom in 2014 : AILEY

Alvin Ailey was a dancer who formed his own troupe in New York in 1958, naming it “the Alvin Ailey American Dance Theater”. The most famous work that Ailey choreographed was called “Revelations”. President Barack Obama awarded Ailey the Presidential Medal of Freedom posthumously, in 2014.

16 Greek goddess who could turn water into wine : OENO

39 Unit of measure in a tongue twister : PECK

The earliest written version of the “Peter Piper” nursery rhyme and tongue twister dates back to 1813 London:

40 Product whose name comes from the French for “without caffeine” : SANKA

Peter Paul Rubens was a Flemish painter who worked in the city of Antwerp in Belgium. Rubens was knighted by two monarchs: Philip IV of Spain, and Charles I of England. When Rubens was 53-years-old, four years after the death of his first wife, he married a 16-year-old girl. It was his young second wife who inspired many of the voluptuous figures with whom Rubens became associated later in his career.

Particle physics is beyond me, but I do know that bosons are subatomic particles. They can be elementary like photons or composite like mesons, which are composed of one quark and one antiquark. “Bosons” are named for the Indian physicist Satyendra Nath Bose who developed Bose-Einstein statistics along with Albert Einstein.

47 Sings to the rafters : BELTS OUT

56 Bread whose name derives from the Sanskrit for “bread” : ROTI

Alex Dunphy is the youngest daughter of Claire and Phil on the sitcom “Modern Family”. Alex is played by the very talented young actress Ariel Winter.

5 The only remaining wonder of the ancient world, for one : PYRAMID

The full list of the Seven Wonders of the Ancient World is:

8 First word in a classic song from “The Sound of Music” : DOE

The famous song that starts off with “Doe, a deer …” is a show tune from the 1959 musical “The Sound of Music”, by Rodgers and Hammerstein. The correct name of the song is “Do-Re-Mi”.

11 Don’t be misled by this : RED HERRING

25 It’s calculated relative to the speed of sound : MACH

“O, I am Fortune’s fool” is a line from William Shakespeare’s play “Romeo and Juliet”. The words are uttered by Romeo after he kills Tybalt, Juliet’s cousin, in a duel. Romeo knows that he has made a bad mistake, and tells everyone so. Sure enough, things go downhill for him and Juliet for the remainder of the play.

Beatrix Potter was an English author famous for the children’s books she wrote and illustrated. The most famous character in her stories was Peter Rabbit, whose sisters were Flopsy, Mopsy and Cottontail. Potter put her talent as an artist to good use in the scientific world as well. She recorded many images of lichens and fungi as seen through her microscope. As a result of her work, she was respected as an expert mycologist.