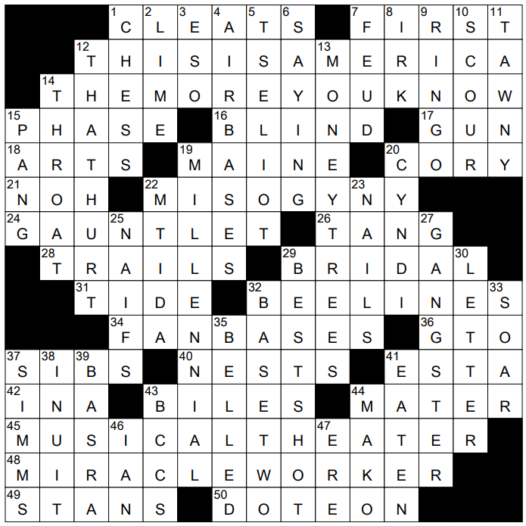 19 Its flag features a pine and the North Star : MAINE

31 Its pods are poisonous to eat : TIDE

To make a beeline for somewhere or something, one takes a direct route. The term derives from the excellent homing instinct of bees.

49 Is super into, in modern parlance : STANS

4 Carriers are mobile ones : AIR BASES

5 Poet who wrote “I grow old … I grow old … / I shall wear the bottoms of my trousers rolled” : TS ELIOT

There are two peaks called Mount Ida that are sacred according to Greek mythology. Mount Ida in Crete is the island’s highest point, and is where one can find the cave in which Zeus was reared. Mount Ida in Asia Minor (located in modern-day Turkey) is where Ganymede was swept up by Zeus in the form of an eagle that took him to Olympus where he served as cupbearer to the gods.

Phil Simms was an NFL quarterback and works as a broadcaster with CBS.

38 The Greenlandic language is a form of it : INUIT

Janis Ian is a singer-songwriter, mainly of folk music, who was most successful in the sixties and seventies. Her most famous song by far is the 1975 recording “At Seventeen”. In more recent years, Ian has been published several times as a science-fiction author.