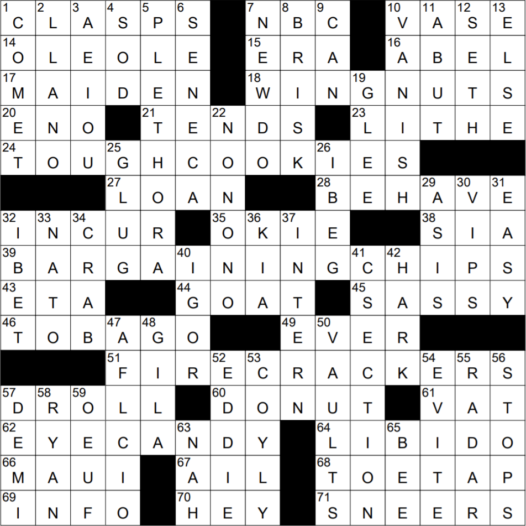 In Ancient Rome the priestesses of the goddess Vesta were known as the Vestals. They were also called the Vestal Virgins as they took a vow of chastity, although they weren’t required to be celibate for life. Each priestess entered the order before puberty and promised to live a celibate life for thirty years. The first decade was spent as a student, the second in service, and the final ten years as a teacher. Upon completion of the thirty years the Vestal was free to marry, but few did. Life was a lot better for a woman in the priesthood than it was subject to Roman Law.

The Comet brand of household cleanser produced a famous series of ads in the sixties through the eighties that featured a character known as “Josephine the Plumber”. Played by actress Jane Withers, she was noted for uttering the line “Nothing can hold a can to Comet!”

Ajax cleanser has been around since 1947, and it’s “stronger than dirt!” That was the most famous slogan over here in the US. On my side of the pond, the celebrated slogan was “it cleans like a white tornado”.

6 Roman philosopher who said “Life is never incomplete if it is an honorable one. At whatever point you leave life, if you leave it in the right way, it is whole” : SENECA

The story that Julius Caesar was born via Caesarean section (C-section) seems to be unfounded. Although such procedures were indeed carried out in ancient Rome, there are no reports of the mother surviving (and Julius Caesar’s mother did raise her child).

Eddie Murphy is a multi-faceted performer and entertainer from the Bushwick neighborhood in Brooklyn, New York. Murphy was a comedian on “Saturday Night Live” from 1980 to 1984. He has also appeared in several hit movies, the success of which make Murphy the fourth-highest grossing actor in the country, as of 2014.

“Trading Places” is a fun comedy film released in 1983, starring Dan Aykroyd and Eddie Murphy. The film is all about a high-flying commodities broker (Aykroyd) “trading places” with a street hustler (Murphy). There’s also a great supporting cast that includes Don Ameche and Jamie Lee Curtis.

A carboy (also “demijohn”) is a large container for liquids, one usually with a capacity of 5 to 15 gallons. Glass and plastic carboys are often used at home for the fermentation of beer and wine.