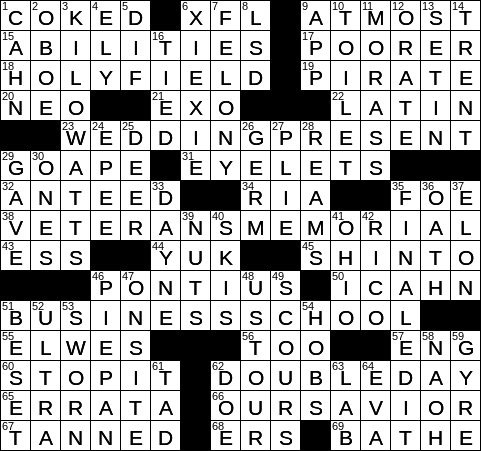 Constructed by: Alex Bajcz
Edited by: Will Shortz

1 Converted into fuel, as coal : COKED

Neo is the character played by Keanu Reeves in “The Matrix” series of films.

Thanos is a supervillain in the Marvel Comics universe. Thanos was portrayed by Damion Poitier in the 2012 movie “The Avengers”, and by Josh Brolin in several subsequent movies including 2014’s “Guardians of the Galaxy”.

Pontius Pilate was the judge at the trial of Jesus Christ and the man who authorized his crucifixion. Over the years, many scholars have suggested that Pilate was a mythical character. However, a block of limestone was found in 1961 in the modern-day city of Caesarea in Israel, and in the block was an inscription that included the name of Pontius Pilate, citing him as Prefect of Judea.

62 Big name in American book publishing for 120+ years … and a hint to the answers to the starred clues : DOUBLEDAY

Doubleday, the publishing company, was founded in 1897 by Frank Nelson Doubleday and Samuel McClure. As a result, the company was originally known as Doubleday & McClure.

66 Epithet for Jesus in some church names : OUR SAVIOR

“I Got You Babe” is a duet that was released in 1965 by Sonny & Cher. The lyrics and music for the song were written by Sonny Bono himself. In 1993, Sonny and Cher did a version of the song with the animated characters Beavis and Butt-head. One has to ask, “Why …?”

3 Units on an electric bill : KILOWATTS

The kilowatt hour (kWh) is a unit of energy, made up of the product of power (kilowatts – kW) and time (hour – h). We see “kWh” all the time, on our electricity bills.

The Beatles released the song “Day Tripper” at the end of 1965 for the Christmas market. The flip-side featured the song “We Can Work It Out”, and the record was the first one ever to be described as “double A-side”.

Nine Inch Nails is the name of a rock band that was founded in Cleveland, Ohio in 1988 by singer-songwriter Trent Reznor. Reznor chose the name “Nine Inch Nails” mainly because it abbreviated easily and succinctly, to “NIN”.

30 About half of all binary code : ONES

In a numeral system, the radix is the number of different digits that are used to represent numbers. For example, the decimal number system that we use has a radix of 10, because we use the ten digits 0, 1, 2 …. 9. The binary system has a radix of 2, as it uses only the digits 1 and 0.

Taylor Dayne is the stage name of singer-songwriter Leslie Wunderman. Dayne’s best-known record is probably “Tell It to My Heart”, released in 1988.

Elon Musk is a successful businessman who has founded or led some very high-profile companies, namely PayPal, Tesla Motors and SpaceX. Musk received a lot of publicity in early 2018 during a test launch by SpaceX of the Falcon Heavy launch vehicle. A Tesla Roadster belonging to Musk was carried into space as a dummy payload.

Cedar Point is an amusement park in Sandusky, Ohio and is the second-oldest such park in the country that is still operating (the oldest is Lake Compounce in Bristol, Connecticut, which opened in 1846). Cedar Point specializes in roller coasters.

“Caribou” is the North American name for “reindeer”.