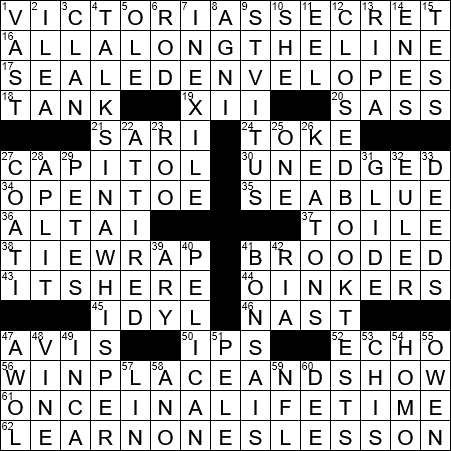 Constructed by: Royce Ferguson
Edited by: Will Shortz

That would be the top of a clock face.

45 One of many writings by Theocritus : IDYL

Theocritus was an ancient Greek poet from Sicily who is remembered especially for his bucolic works, works set in the countryside.

In horse racing, a trifecta is a bet in which the first, second and third place finishers are predicted in the correct order. The same bet can be made in jai alai competitions, predicting the top three finishers.

The human ileum (plural “ilea”) is the lowest part of the small intestine, and is found below the jejunum and above the cecum of the large intestine.

Back in the mid-1300s, a coat of arms literally was a coat, a tunic embroidered with heraldic symbols that was often worn over armor. This usage also gave us the term “turncoat”, which described someone who turned his coat inside-out in order to hide his badge of loyalty.

9 One of the Fourteen Holy Helpers in Roman Catholicism : ST VITUS

Saint Vitus was a martyr from Sicily who died during the persecution of Christians in Ancient Rome. Back in the Middle Ages, devotees celebrated the feast of Saint Vitus by dancing in front of his statue. This practice led to Vitus becoming the patron saint of dancers.

Hollywood actress Julia Roberts is from Smyrna, Georgia. Roberts got her big break after starring opposite Richard Gere in the hit 1990 romantic comedy “Pretty Woman”. She was paid $300,000 for her performance in “Pretty Woman”, a little less than the $25 million paycheck she was to earn for appearing in 2003’s “Mona Lisa Smile”. Roberts was married for a couple of years to country singer Lyle Lovett, and her older brother is actor Eric Roberts.

23 Down Under critter : ROO

Diane Keaton’s first major film role was Kay Admas-Corleone, wife of Michael Corleone, in “The Godfather”. Famously, she then appeared as a comic actress in a series of Woody Allen movies in the seventies. Keaton never married, although she was romantically involved with some famous Hollywood names over the years, including Woody Allen, Warren Beatty and Al Pacino.

27 Animal with a long snout and striped tail : COATI

The Greek letter chi is the one that looks like our letter X.

59 Its members have plenty of down time: Abbr. : NFL

Ruby Dee was an actress and civil rights activist. On the big screen, she is perhaps best remembered for co-starring in “A Raisin in the Sun” alongside Sidney Poitier, in “Do the Right Thing” alongside her husband Ossie Davis, and in “American Gangster” in which she played Denzel Washington’s mother.