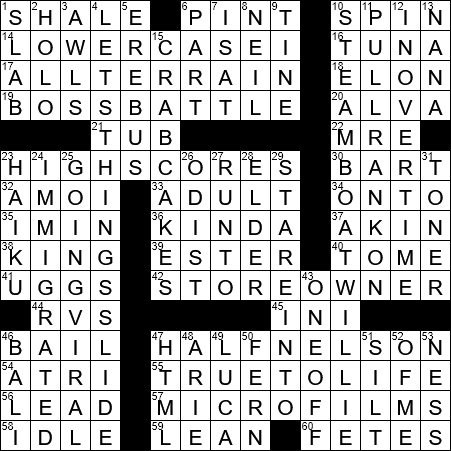 Thomas Alva Edison (TAE) was a very successful inventor. He held over a thousand US patents in his name. Included in the list of Edison’s inventions is the phonograph, the movie camera and the long-lasting light bulb. He passed away in 1931. There is a test tube at the Henry Ford Museum that supposedly holds Edison’s last breath. Ford convinced Thomas’s son Charles to seal up a tube of air in the room just after the inventor died, as a memento.

23 Listing in an arcade : HIGH SCORES

30 First name of the only fictional character in Time’s list of the 100 Most Important People of the Century : BART

35 Cry from a successful hacker : I’M IN

38 Leader memorialized by the Stone of Hope statue near the National Mall : KING

1963’s March on Washington was one of the largest political rallies in the history of the US, with about a quarter of a million people participating in the march itself. The rally was a call for civil and economic rights for African Americans. Famously, Martin Luther King, Jr. delivered his “I Have a Dream” speech to the protesters while standing in front of the Lincoln Memorial.

Henry Wadsworth Longfellow wrote “The Sicilian’s Tale; The Bell of Atri”, a narrative poem set in the small town of Atri in the Abruzzo region of Italy.

Lead is a heavy metallic element with the symbol Pb (standing for “plumbum”, Latin for “lead”). Although lead proves to be a very useful metal, it is very toxic and is poisonous if absorbed into the body.

The antlers on a deer come to points. The higher the number of points, the more prized the head of the deer as a trophy, so I am told …

23 Bit of poetry with the same syllable count as this very clue : HAIKU

Luca Brasi is one of Don Corleone’s most loyal “enforcers” in Mario Puzo’s novel “The Godfather”. Brasi comes to a violent end, garroted while his hand is pinned to a wooden bar with a knife. Famously, the Corleone family learn of his demise when they receive Brasi’s bulletproof vest wrapped around dead fish. The message is that he “sleeps with the fishes”. In the big screen adaptation of “The Godfather”, Luca Brasi is played by ex-wrestler and professional bodyguard Lenny Montana. The role launched a very successful television character-acting career for Montana.