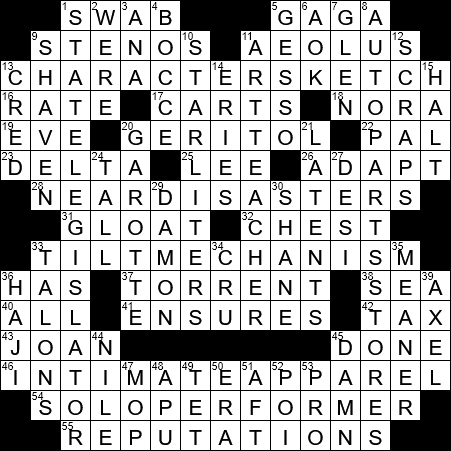 We have some grid art today, with black squares SKETCHING out a face.

11 Greek god of the winds : AEOLUS

Nora Roberts is a very successful author who has written over 165 romance novels. Roberts is published under a number of pen names, i.e. J.D. Robb, Jill March and Sarah Hardesty.

The “Geritol” brand name was very carefully chosen at the time it was introduced, in 1950, to suggest that it is efficacious for us as we move on in years. In general, the formula has always featured iron and several B-complex vitamins. Geritol ran afoul of the Federal Trade Commission (FTC) in the early sixties due to its claims that it is effective in relieving tiredness, regardless of the cause. In 1965, the company was instructed by the FTC to make it clear in its advertising that Geritol’s formula is only effective in relieving tiredness in individuals suffering from anemia (a lack of iron).

Lee Majors is an actor best known for his roles on television. He played Heath Barkley on the Western show “The Big Valley” from 1965 to 1969, Steve Austin on the sci-fi show “The Six Million Dollar Man” from 1973 to 1978, and Colt Seavers on the action show “The Fall Guy”. Majors has been married four times, including to fellow actor Farrah Fawcett from 1973 to 1979.

Sacramento, California’s state capital, was named for the Sacramento River. The river was named by a Spanish explorer, who called it “Rio de los Sacramentos”. This translates as “River of the Blessed Sacrament”.

Joey Dee and the Starliters (sometimes “Starlighters”) are a pop music group best known for the 1961 hit “Peppermint Twist”.

The handheld weapon known as a garrote (also “garotte”) was particularly associated with murderers and robbers harassing travelers in India. These felons were known locally as “thuggees” (from the Hindi word for “thief”). This gave us our contemporary word “thug”, meaning “brute”.

30 Classic western hero who says “A man has to be what he is, Joey. Can’t break the mold” : SHANE

A talon is a claw of a bird of prey. The term “talon” ultimately derives from “talus”, the Latin word for “ankle”.

“Bad, Bad Leroy Brown” is a song written and first performed by Jim Croce. It was a number-one hit for him in 1973. The song was inspired by a real-life Leroy Brown, who was someone that Croce met while serving in the US Army.

36 Mideast traveler, of a sort : HAJI

39 Double or triple feat in the Olympics : AXEL

47 Challenge for a barber : MOP