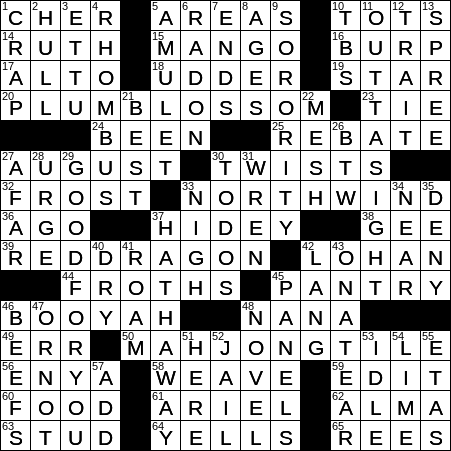 Themed answers are each icons depicted on a Mahjong tile:

27 Month with no federal holidays : AUGUST

I’ve always thought the Welsh flag to be a magnificent design. At the center of the flag is a red dragon, which was the emblem of Cadwaladr. Cadwaladr was the king of much of what today is known as Wales, from 655 to 682.

The word “pantry” dates back to 1300, when it came into English from the Old French “panetrie” meaning a “bread room”. Bread is “pain” in French, and “panis” in Latin.

A gourmand is someone who takes great pleasure in consuming food and drink, often eating and drinking to excess. The related term “gourmet” refers to someone who has a refined palate.

The head of the word “wren” is a silent letter W.

A beef is a complaint or a grievance. It’s not quite clear how “beef” came to have this meaning, but one suggestion is that it derives from the habit of soldiers at the end of the 1800s complaining about the quality or availability of beef in their rations.

48 “To Kill a Mockingbird” or “The Maltese Falcon” : NOVEL

52 One corner on a Monopoly board : JAIL

54 Garnish for a Corona : LIME

55 Scheduling guesses that might be updated in midair, for short : ETAS