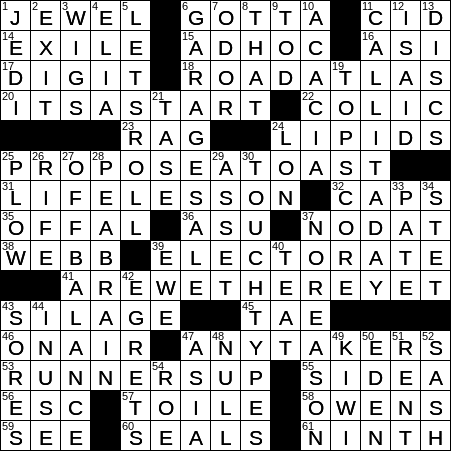 11 Castilian knight in medieval Spain, with “the” : CID

In the world of music, syncopation is the expected emphasis away from the normally accented beat, producing an unexpected rhythm, an “offbeat” rhythm. Syncopation is a characteristic of many genres of music, notably ragtime and jazz.

“Silage” is fodder, such as hay, that has fermented in a “silo” due to the activity of anaerobic bacteria. The process of ensilaging (sometimes “silaging”) is said to make the fodder more tasty to the animals being fed, and at least provides some variety in the diet.

56 Abbreviation near a tilde : ESC

10 Food for a giraffe : ACACIA

The drum brake was invented in 1902 by Louis Renault (founder of Renault, the automobile company). In a drum brake, there is a set of brake shoes that usually presses on the inner surface of the drum to slow down rotation. Nowadays, the disc brake system is more popular, a design which uses brake pads instead of brake shoes.