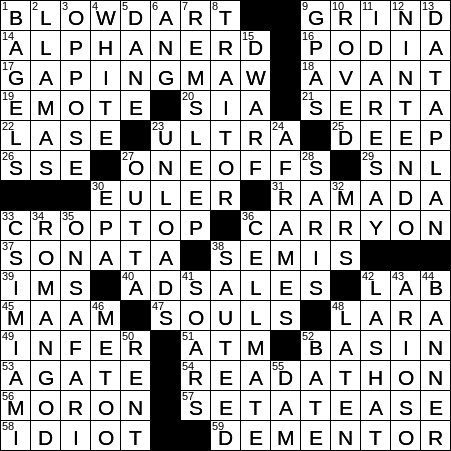 The term “ultramarathon” describes a race that is longer than the 26.2 miles of a traditional marathon. “Ultra running” falls into two categories. Some races cover a specified distance or route, while others last for a specified time, with the winner covering the most distance in that time.

A ramada is a shelter with a roof and no walls, and is mainly found in the American southwest. Nowadays, the shelter can be temporary or permanent, but originally ramadas were makeshift shelters constructed by aboriginal Indians from branches or bushes.

37 It’s a series of movements : SONATA

39 Some online comments, for short : IMS

1 They can be everything : BAGELS

An everything bagel has everything on it, i.e. a variety of traditional seasonings like poppy seeds, salt, and sesame seeds.

7 You might not get it during a power nap : REM SLEEP

30 Org. with the Office of Land and Emergency Management : EPA

An arioso (plural “ariosi”) is a solo vocal piece in a classical work such as an opera or an oratorio. An arioso’s structure lies somewhere between that of a full-blown aria and speech-like recitative.

50 It may be high for a penthouse : RENT