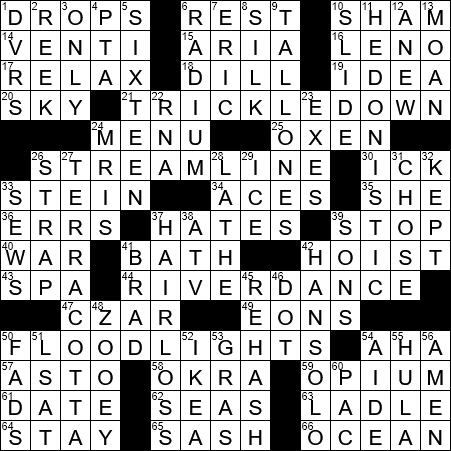 Today’s Theme (according to Bill): Drops Heading for the Ocean

Themed answers start with DROPS and end with OCEAN. In between, themed answer start with increasing flows of water as we progress down the grid:

6 What to do on the Sabbath, per the Bible : REST

The Sabbath is a day of rest and religious observance in several religions. The Sabbath is Saturday in the Jewish faith and in some Christian traditions. It is Sunday for most Christians, and Friday in the Muslim faith.

The hugely successful Irish music and dance show “Riverdance” originated in 1994. In its first manifestation, the show was a relatively short entertainment created for the interval in the annual Eurovision Song Contest. A few months later, it was expanded into a full show that premiered in Dublin in early 1995. Since then, the show has traveled all over the world and has been seen by over 25 million people.

In the US, the term “Creole” is usually a reference to the people descended from the colonial French and colonial Spanish people who settled in the Louisiana region before it became part of the United States with the Louisiana Purchase of 1803.

Those would be commands to a dog.

10 Command to a base runner racing a throw : SLIDE!

11 Committed to the pursuit of pleasure : HEDONISTIC

24 Some diagnostic scans, for short : MRIS

The tem “terra cotta” comes to us from Latin via Italian and means “baked earth”. Terra cotta is a ceramic made from clay which is left unglazed. Maybe the most famous work in terra cotta is the Terracotta Army, the enormous collection of life-size figures that was buried with Qin Shi Huang, the First Emperor of China around 210 BC. I had the privilege of seeing some of this collection when it toured the US a few years ago, and even the few pieces on display were very impressive.

Rogaine is a brand name for the drug minoxidil. It was developed as an oral medication to treat high blood pressure, but was found to have an exploitable side-effect. It caused an increase in the rate of hair growth. A topical solution was marketed to promote growth of hair especially in balding men. The drug seems to work well, but when the patient stops using it, things go back to normal in about 60 days. Wouldn’t dream of touching the stuff myself …

The Sons of Liberty was a secret organization in Colonial America that opposed the imposition of local taxes by the British. The group embraced the watchword at the time. “No Taxation with Representation”. The most famous act of rebellion by the Sons of Liberty was 1773’s Boston Tea Party. The list of notable members of the organization includes John Adams, Benedict Arnold, Samuel Adams, John Hancock and Paul Revere.