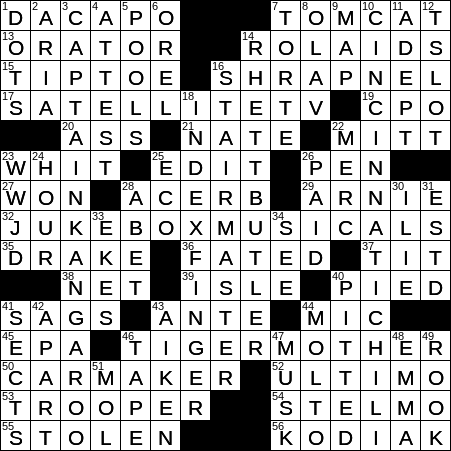 1 From the beginning, on scores : DA CAPO

The musical term “da capo” is an instruction to repeat from the beginning. The term translates literally from Italian as “from the head”.

The Rolaids brand of antacid was invented in the late twenties. The “Rolaids” name came from the fact that the original packaging was a foil “roll”. The product has a tagline: Rolaids—that’s how you spell relief. That slogan dates back to a 1970s TV campaign:

Nate Silver is a statistician who gained celebrity by developing a forecasting system that predicted the future performance of baseball players. He then made a name for himself in the world of politics by predicting the outcome of the 2008 US presidential race on his website FiveThirtyEight.com. Silver successfully predicted the outcome of the election in 49 of the 50 states, missing out on Indiana, which Barack Obama won by less than 1% of the vote. FiveThirtyEight was less successful in predicting the specifics of the 2012 presidential election, but came closer than almost all other pollsters. In 2016, FiveThirtyEight predicted a victory for Hillary Clinton, but with a much lower probability than other poll aggregators. And, they all got it wrong. Oh, and why the name FiveThirtyEight.com? Because there are 538 electors in the US electoral college.

39 Setting for many a season of “Survivor” : ISLE

The Energy Star standard was created by the Environmental Protection Agency (EPA) and the Department of Energy (DOE) during the Clinton Administration. In general, an item marked with an Energy Star uses 20-30% less energy than that mandated by federal standards. Not too long ago, we put an Energy Star roof on our house, and noticed a remarkable difference in our energy bills.

“Ultimo” is the Italian for “last” and is used in English to mean “in the last month”.

54 Erasmus of Formia, by another name : ST ELMO

Orel (also “Oryol”) is a city lying on the Oka River, just over 200 miles SSW of Moscow. Orel was one of the cities occupied by Germany during WWII. It was liberated in 1943, but had been almost completely destroyed.

The famous line “Frankly, my dear, I don’t give a damn.” from 1939’s “Gone With the Wind” was ranked no. 1 in a list of top movie quotes compiled by “The Hollywood Reporter”. The top of the list makes interesting reading, with the following comprising the top five:

The Chicago Mercantile Exchange (the “Merc”) started its life as the Chicago Butter and Egg Board in 1898. The Merc is the site for exchange of commodities, among other things.

What would Jesus do? (WWJD)

Date palms can be either male or female. Only the female tree bears fruit (dates).

“Molto” is Italian for “very”.

Emma Goldman was an anarchist from present day Lithuania who emigrated to New York City. When President William McKinley was assassinated in 1901, the assassin Leon Czolgosz said that he was inspired to carry out the terrible deed after listening to a speech by Emma Goldman. This was enough for the authorities to arrest Goldman and charge her with planning the killing, although she was released after two weeks.