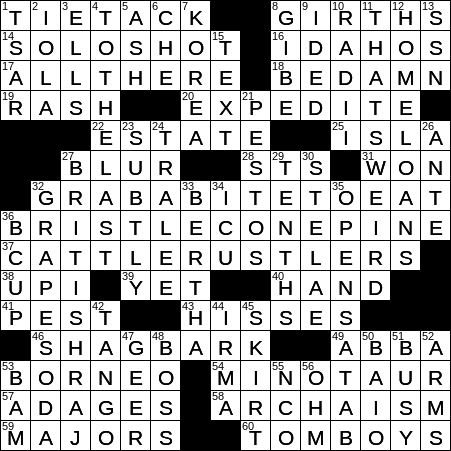 I used to wear a tie pin (or “tie tack, tie tac”) in place of a tie clip many moons ago, but it just left little holes in my expensive silk ties!

28 Whom basilicas are often named after: Abbr. : STS

54 Center of a maze : MINOTAUR

The Crimean War of 1855-1856 was fought between Russia and an alliance comprising France, Britain, the Ottoman Empire and Sardinia. One of the most famous engagements of the Crimean War was the 1854 Battle of Balaclava, which involved the disastrous Charge of the Light Brigade.

In the famous “The Hardy Boys” series of books, Joe Hardy’s girlfriend is Iola Morton. Iola’s best friend is Callie Shaw, the girlfriend of Frank Hardy. Iola was killed off in a car bomb in one of the stories.

Tralee is the county town of Kerry in Ireland. Tralee is home to the famed “Rose of Tralee” Festival that is so well attended by representatives from North America.

42 One of the letters of NATO, in the NATO alphabet : TANGO

Hurricane Irma was a devastating category-5 hurricane that led to over 100 deaths in the contiguous US in 2017, and half as many in the Caribbean islands. Irma was the most intense hurricane to make landfall in the continental US since Katrina in 2005.

Actor Will Geer died in 1978 just after filming the sixth season of “The Waltons”, in which he played Grandpa Zeb Walton. Geer was a noted social activist and was blacklisted in the fifties for refusing to appear before the all-powerful House Committee on Un-American Activities.

56 Unit in a calculation of power : OHM