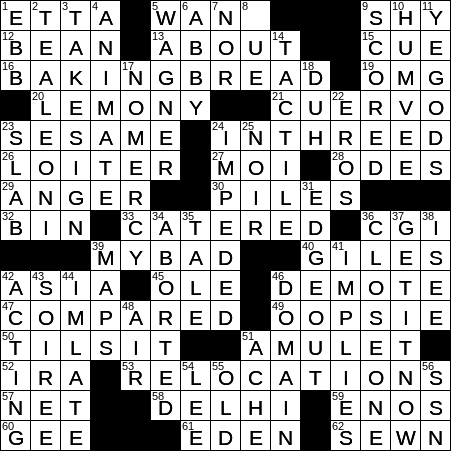 Constructed by: Yacob Yonas and Erik Agard
Edited by: Will Shortz

Themed answers are well-known phrases in which the letter sequence RE has been RELOCATED:

The navy bean is a white bean, and is the bean commonly found in the dish known as “baked beans”. It can also be called a haricot bean. The term “navy bean” is used because haricot beans were a staple for sailors in the 19th-century US Navy.

The AMC drama “Breaking Bad” is a well-written show about a high school teacher stricken by lung cancer who turns to a life of crime to make money. It turns out that the teacher has a talent for making high-quality crystal meth. The show was created by Vince Gilligan who had spent many years as a producer and writer of “The X-Files”. There is a “Breaking Bad” spin-off show running on AMC called “Better Call Saul” that focuses on the life of lawyer Saul Goodman. To be honest, I enjoyed “Better Call Saul” even more than the original show …

Java is a large island in Indonesia that is home to the country’s capital, Jakarta. With a population of over 130 million, Java is the most populous island in the world, with even more people than Honshu, the main island of Japan.

Tilsit cheese was created in the mid-1800s by Prussian-Swiss settlers around the town of Tilsit in former East Prussia. Tilsit is now the city of Sovetsk in Russia.

The nation of India comprises 29 states and 7 union territories. The largest state by area is Rajasthan, in the northwest of the country. The most populous state is the neighboring Uttar Pradesh.

Mireille Enos is an actress from Kansas City. Enos is perhaps best known for her TV work, playing Sarah Linden on “The Killing” and for playing twins Kathy and JoDean Marquart on “Big Love”. Enos is married to actor Alan Ruck, who I mainly remember playing Cameron Frye in the great movie “Ferris Bueller’s Day Off”.

61 Source of the Tigris and Euphrates, per Genesis : EDEN

“Madam Secretary” is A TV show that first aired in 2014. It is about an ex-CIA analyst who is appointed as US Secretary of State. Téa Leoni plays the title role, ably supported by a favorite actress of mine, Bebe Neuwirth. I like this show …

The advice column “Dear Abby” first appeared in 1956. Pauline Phillips was Abby back then, but now the column is written by Jeanne Phillips, her daughter. The full name of the “Abby” pen name is Abigail Van Buren, which Pauline Phillips came up with by combining “Abigail” from the biblical Book of Samuel, and “Van Buren” after the former US president. “Dear Abby” was also a radio show in the sixties and seventies.

17 What the ruthless show : NO MERCY

The concept of playing an imaginary electric guitar (“air guitar”) is so popular that there are several championship competitions held, including a world championship since 1996. Crazy …

54 Daniels who directed “The Butler” : LEE

“Lee Daniels’ The Butler” is a 2013 movie that is loosely based on the life of Eugene Allen, who worked at the White House for 34 years before retiring as head butler in 1986. Forest Whitaker plays the title role. My wife saw this one, and really enjoyed it. It has been on my list for quite a while now …