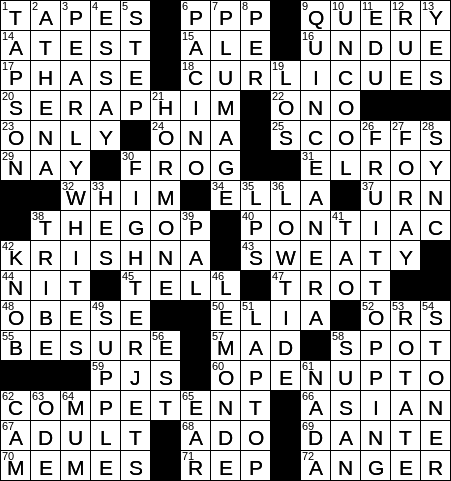 Themed answers are each in the down-direction, and each is TOPPED (starts) with a FRUIT:

40 Ottawa chief who shares his name with an automobile : PONTIAC

69 Someone hell-bent on writing? : DANTE

Pilates is a physical exercise system developed by, and named for, Joseph Pilates. Pilates introduced his system of exercises in 1883 in Germany.

“Dog Day Afternoon” is a crime film released in 1975. The movie was inspired by a real life incident, a robbery at a bank in Brooklyn, New York by John Wojtowicz and Salvatore Naturile. Al Pacino and John Cazale played the robbers in the film, with the names changed to Sonny Wortzik and Sal Naturile.

The quince is a fruit related to the apple and pear. Some people suggest that the fruit eaten from the Tree of Knowledge by Adam and Eve was in fact a quince.

21 Subject of interest to an endocrinologist : HORMONE

“He’s Just Not That Into You” is a line of dialog from the HBO television series “Sex and the City”. The line was lifted and used as the title of a self-help book published in 2004. The book was adapted into a 2009 romantic comedy film with an ensemble cast that includes Ben Affleck, Jennifer Aniston, Drew Barrymore and Scarlett Johansson. Haven’t seen it …

35 Platters from the Platters, for short : LPS

Etch A Sketch was introduced in 1960. The toy was developed in France by inventor André Cassagnes.

54 One living the high life? : STONER

“Odes to Common Things” is a collection of poems by Chilean poet Pablo Neruda. Included in the list of 25 odes is “Ode to the Table”, “Ode to the Dog”, Ode to the Artichoke” and “Ode to French Fries”.