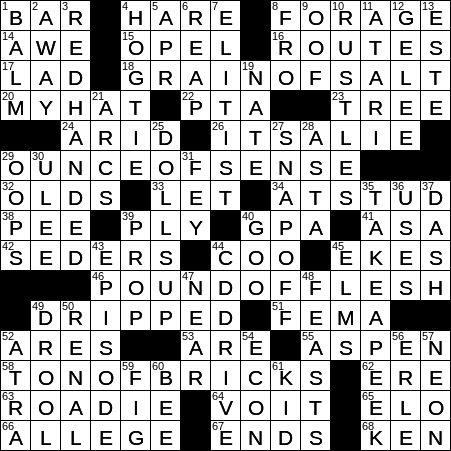 Themed answers each start with a unit of weight. Those weights get heavier as we progress down the grid:

4 Fabled loser to a tortoise : HARE

34 Offered for breeding, as a derby winner : AT STUD

38 Letter between oh and cue : PEE

46 Shylock’s harsh demand, in “The Merchant of Venice” : POUND OF FLESH

Famously, at the climax of William Shakespeare’s “The Merchant of Venice”, Antonio goes on trial because he cannot repay a loan to Shylock of 3,000 ducats. Faced with non-payment, Shylock demands his legal right to “a pound of flesh”.

49 Leaked, as an old faucet : DRIPPED

Voit is a sporting goods company that was founded by William J. Voit in 1922. Voit invented the first all-rubber inflatable ball, in the late twenties.

3 How robbers can get caught : RED-HANDED

To be caught red-handed is to be caught in the act. The expression originated in Scotland and dates back at least to the 1400s. The red in question is blood, as in being caught with blood on one’s hands after perhaps committing a murder or an act of poaching.

4 Immobilize with rope, in a way : HOG-TIE

11 Maker of the game Centipede : ATARI

36 Baking soda has lots of them : USES

“Baking soda” is a common name for the compound sodium bicarbonate (NaHCO3).

In Shakespeare’s “Hamlet”, there is a scene when Prince Hamlet holds in his hand the skull of the deceased court jester Yorick. Hamlet starts into a famous monologue at this point:

Alas, poor Yorick! I knew him, Horatio; a fellow of infinite jest, of most excellent fancy; he hath borne me on his back a thousand times; and now, how abhorred in my imagination it is …

The opening line is often misquoted as “Alas, poor Yorick! I knew him well.”

Something described as renal is related to the kidneys. “Ren” is the Latin word for “kidney”.