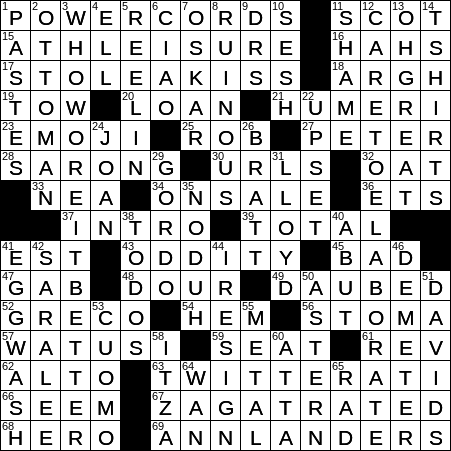 Constructed by: Wyna Liu & Paolo Pasco
Edited by: Will Shortz

11 One whose coat of arms displays a unicorn : SCOT

The Royal Coat of Arms of Scotland was the official coat of arms used by the Scottish monarchs until the United Kingdom of Great Britain (uniting Scotland and England) was formed in 1707. The coat of arms features a shield supported by two chained unicorns on either side.

One might steal a cheeky kiss on a cheek.

The ulnar nerve runs alongside the ulna (one of the bones in the lower arm). The ulnar nerve is the largest unprotected (not surrounded by muscle or bone) nerve in the human body. The nerve can be touched under the skin at the outside of the elbow. Striking the nerve at this point causes an electric-type shock known as hitting one’s “funny bone” or “crazy bone”.

“Sarong” is the Malay word for “sheath. The term originally described a garment worn by Malay men and women around their waists. The Malay sarong is actually a tube of fabric, about a yard wide and two-and-a-half yards long. Many variations of the sarong are worn all over South Asia and the Pacific Islands. I had occasion to wear one in Hawaii many years ago, and found it very … freeing!

33 Sponsor of the Poetry Out Loud program, for short : NEA

Poetry Out Loud is an annual recitation contest that was founded in 2006 by the National Endowment for the Arts (NEA) and the Poetry Foundation.

Stomata (the usual plural of stoma, not “stomas”) are pores found under almost every leaf, clearly visible under a simple microscope. The stomata take in air rich in carbon dioxide. Through the process of photosynthesis, the plants generate oxygen, which is released back into the air though the same stomata.

The dance called the Watusi was almost as popular as the twist in the early sixties. The Watusi took its name from the Batutsi tribe in Rwanda.

When the track “Revolution 9”, from the Beatles’ “White Album”, is played backwards, there is a section that appears to say “Turn me on, dead man”. This helped fuel an existing urban legend that Paul McCartney died in a car crash in 1966 and was replaced by someone who just looked like him.

67 Sticker in a restaurant window : ZAGAT-RATED

The Zagat Survey is best known for rating restaurants across the major cities of the US, but it also rates things like hotels, nightlife, shopping, airlines and even zoos. The survey was started by Tim and Nina Zagat in 1979, and back then the survey was simply a collection of New York City restaurant ratings provided by friends of the couple.

2 Place for dogs to rest : OTTOMAN

Apparently, the phrase “my dogs are barking” meaning “my feet are hurting” originated in America in the 1920s. From there evolved the use of the term “dogs” for “feet”.

3 Tabloid question next to two people in the same outfit : WHO WORE IT BETTER?

“The Tin Drum” is a novel by German author Günter Grass that was first published in 1959. The book was adapted into a very successful 1979 film of the same name, which won that season’s Academy Award for Best Foreign Language Film.

Our word “cataclysm”, meaning “violent upheaval”, comes from the Greek “kataklyzein”, meaning “deluge, flood” or more literally “to wash down”.

Lucy Liu is an actress from Queens, New York. Liu’s big break came when she was chosen to play the Ling Woo character in “Ally McBeal”. I liked her in the 2000 film “Charlie’s Angels” but as I am no fan of Quentin Tarantino, I did not enjoy the movie “Kill Bill”. I do enjoy one of Liu’s more recent projects in which she plays Jane Watson, one of the two lead characters in the TV crime drama “Elementary”.

Actor Benjamin Bratt’s most noted role has to be Detective Rey Curtis on the NBC cop show “Law & Order”. Bratt dated the actress Julia Roberts for a few years.

In Greek mythology, Demeter was the goddess of the harvest. Her Roman equivalent was Ceres.

Mario Cuomo was Governor of New York from 1983 to 1994. I well remember Mario Cuomo’s keynote address to the 1984 Democratic National Convention soon after I moved to America. For a new immigrant it was an interesting glimpse into American politics. Here’s a little bit of trivia about Mario Cuomo: he was the first ever guest for Larry King on his CNN talk show “Larry King Live”, back in 1985. Cuomo passed away in January 2015 at the age of 82.

Andrew Cuomo won the gubernatorial election for the State of New York (NYS) in 2010. Andrew is the son of former Governor of New York Mario Cuomo. Andrew was also married for 13 years to Kerry Kennedy, a daughter of Robert F. Kennedy.

Lead is a heavy metallic element with the symbol Pb (standing for “plumbum”, Latin for “lead”). Although lead proves to be a very useful metal, it is very toxic and is poisonous if absorbed into the body.