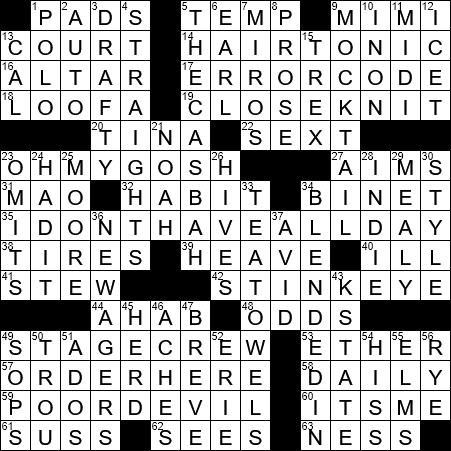 An HTTP 404 error is one of the common errors encountered when browsing the World Wide Web. The error is returned when a user accesses a site successfully, but cannot find the page that is requested. Usually, this 404 Not Found error is encountered when clicking on a broken or dead link. As an aside, I’d appreciate it if any reader could contact me or leave a comment if a broken link is encountered on this web site. Thank you!

22 Subject of a scandal, maybe : SEXT

The phrase “stink eye”, meaning “dirty look”, dates back to the early 1970s. A suggestion is that the term comes from Hawaiian slang.

“Rock the Casbah” was a hit for the Clash, a punk rock band from England. It was the first song aired by Armed Forces Radio during Operation Desert Storm.

7 “The Spanish Playing Cards” and “Nude With Mirror” : MIROS

Joan Miró was a Spanish artist. Miro immersed himself in Surrealism, so much so that Andre Breton, the founder of the movement, said that Miró was “the most Surrealist of us all”. There are two museums dedicated to Miró’s work. The Fundació Joan Miró is in his native Barcelona, and the Fundació Miró Mallorca is in Palma de Mallorca, where he the artist spent much of his life.

12 Grammy winner whose name sounds like a beverage : ICE-T

I wish we’d stop using the term “calorie”, because it is so confusing. In terms of physics, a calorie is the amount of energy needed to raise the temperature of one gram of water by one degree celsius (at one atmosphere of pressure). The so-called “food calorie” is one thousand times as large, as it is defined in terms of kilograms instead of grams. In attempts to differentiate between these two definitions, the former is sometimes referred to as the “small calorie” and is given the symbol “cal”. The latter is referred to as the “large calorie” and given the symbol “Cal”, with a capital C. If only we’d use the SI system of units, we’d be think in just joules, instead of large and small and food calories.

21 One famous for seeing double? : NOAH

Marianne Moore is an American poet whose most famous work is probably the poem known as “Poetry”, appropriately enough.

Kansas State University (KSU) was founded as the Kansas State Agricultural College in 1863 during the Civil War. The main KSU campus is located in the city of Manhattan, which is 56 miles northwest of Topeka, Kansas.

Where I grew up a whole note is called a semibreve, and a half note is a minim.

Erie is a city in the very north of Pennsylvania, sitting on the southern shore of Lake Erie. The city takes its name from the Erie Native American tribe that resided in the area. Erie is nicknamed the Gem City, a reference to the “sparkling” water of Lake Erie.