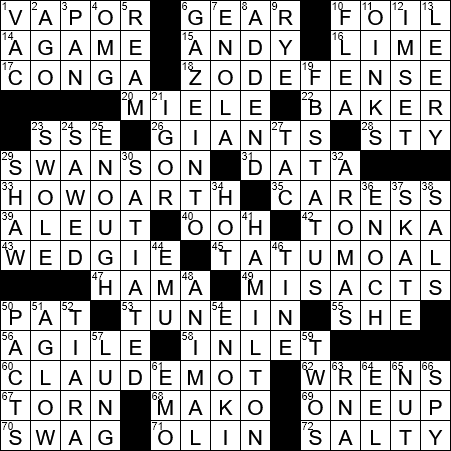 Themed clues are all in the across-direction, and use the letters “ONE” written in the up-direction in the grid:

Andy Reid was head coach of the Philadelphia Eagles football team for 13 years before taking up the head coaching position with the Kansas City Chiefs in 2013.

16 Garnish for a Corona : LIME

Miele is a manufacturer of kitchen equipment based in Germany. The company was founded by Carl Miele and Reinhard Zinkann in 1899, and is still privately-held and family-run. One of Miele’s first products was a butter churn.

26 Cyclops and others : GIANTS

Gloria Swanson was the highest-paid movie actor of the Silent Era. Famously, Swanson made a comeback in movies when she played a reclusive silent film star in the 1950 film “Sunset Boulevard”. Off the screen, the actress was notorious for her affair with Joe Kennedy, Sr., father of President John F. Kennedy.

“Sunset Boulevard” is a classic film noir co-written and directed by the great Billy Wilder, and released in 1950. It’s a story about a faded film star (played by Gloria Swanson) who dreams about making a return to the screen. Andrew Lloyd Webber made a reasonably successful musical adaptation of the film using the same title, which opened in London in 1993.

39 Dweller along the Bering Sea : ALEUT

The Bering Sea, in the very north of the Pacific Ocean, is named for the Danish navigator Vitus Bering, who was the first European to systematically explore the area in 1728. Many believe that the first humans arrived in the Americas from Asia when the waters of the Bering Sea were lower during the last ice age, over what is known as the Bering land bridge.

She-crab soup is a specialty in coastal Virginia, South Carolina and Georgia. The soup is very rich as it is made with cream and is similar to a bisque. The list of ingredients includes Atlantic blue crab, and crab roe. It is the use of the roe that gives the name “She-crab”, as that’s where the roe comes from!

“Addend” is short for “addendum”, and is the name given to any element in a set of numbers that is to be added.

“Major Barbara” is a 1905 play by Irish author George Bernard Shaw. The title character is Barbara Undershaft, a major in the Salvation Army who spends a great deal of her time helping the poor. Barbara takes offense when her father donates money to the Salvation Army, money that he earned selling munitions.

30 Stuffed to the gills : SATIATED

Skates (formally “Rajidae”) are a family of fish in the superorder of rays (formally “batoidea”). Skates look very similar to stingrays, but they lack stinging spines.