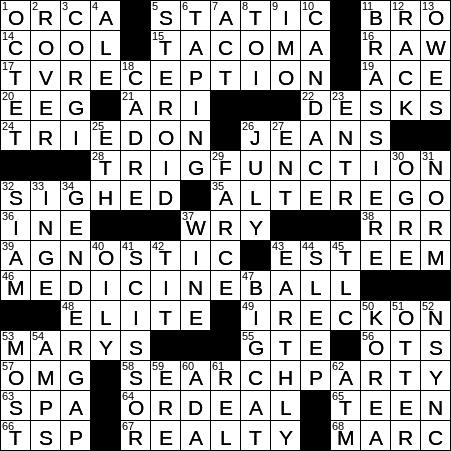 15 City that shares an airport with Seattle : TACOMA

Tacoma is a city on Puget Sound in the state of Washington. The city took its name from Mount Rainier that is nearby, as the peak is also known as Tacoma (or “Tahoma”).

28 The mathematicians met at a … : … TRIG FUNCTION

39 Neither a believer nor a disbeliever : AGNOSTIC

“Going My Way” is a 1944 musical film starring Bing Crosby and Barry Fitzgerald as the incoming and outgoing pastors of a New York City parish. The film was so successful that it spawned a sequel called “The Bells of St. Mary’s” that was released the following year, with Crosby starring opposite Ingrid Bergman.

67 Property in buildings and land : REALTY

10 Bushnell who wrote “Sex and the City” : CANDACE

11 Garment with a French name : BRASSIERE

26 Part of the calendar named for Caesar : JULY

Our contemporary calendar has its roots in the old Roman calendar, which originally had ten months and was attributed to Romulus:

Formerly known as Siam, the Kingdom of Thailand is operating as a military dictatorship following a 2014 coup.

Playwright William Inge had a run of success on Broadway in the early fifties. Inge’s most celebrated work of that time is the play “Picnic”, for which he was awarded a Pulitzer Prize. The original 1953 cast of “Picnic” included a young male actor making his debut on Broadway. His name was Paul Newman. Many of Inge’s works are set in the American heartland and so he became known as the “Playwright of the Midwest”.

45 That special touch, for short : TLC