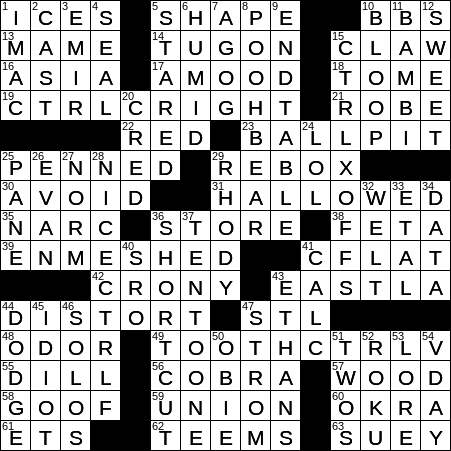 Constructed by: Wayne Bergman & Gary Otting
Edited by: Will Shortz

Themed answers are common two-word phrases, with one word replaced with a PC keyboard SHORTCUT that uses the CTRL key:

The term “copyright” really derives from the concept of giving another party the “right to copy”. Usually “copyright” gives the holder the power to financially benefit from any copies made. Copyright was invented in essence soon after the development of the printing press, with the first legal statutes put in place in Britain in the early 18th century.

Back in the 1800s, to nark was to act as a police informer. The spelling of the verb “nark” evolved into “narc” due to the influence of the noun “narc”, slang for “narcotics officer”.

A crony is a friend or companion. The term originated as slang in Cambridge University in England in the 1600s. “Crony” is probably derived from the Greek “khronios” meaning “long-lasting”.

Crest is a Procter & Gamble brand of toothpaste that was introduced in 1953.

Dill is a herb in the celery family. Dill seeds can be used for flavoring food, as can dill leaves. In this sense, dill “leaves” are sometimes referred to as dill “weed”.

The Bell AH-1 Cobra attack helicopter was the mainstay of the US Army’s helicopter fleet, until it was replaced by the AH-64 Apache.

Many believe that the Chinese dish known as chop suey was invented in America, by Chinese immigrants. In fact, by the time it showed up in the US it already existed in the Taishan district of Guangdong in southeast China, the origin of many of those immigrants. “Chop suey” translates as “assorted pieces”, and is made up of some meat and eggs quickly cooked with vegetables in a thickened sauce.

10 Hit that goes over the infielders’ heads : BLOOP

In baseball, a bloop single is more usually called a blooper. It’s a fly ball that drops for a single between an infielder and an outfielder.

11 Disney movie with fewer than a thousand words of dialogue : BAMBI

15 Jeans that have been summerized : CUTOFFS (CTRL-X = CUT)

Summerized, altered for the summer.

20 Standing on the street : CRED

“Street cred” is slang for “street credibility”, of which I have none …

Steve Carell’s “Evan Almighty” was actually a sequel, to Jim Carrey’s “Bruce Almighty”. “Evan Almighty” is a cute enough film, with Evan mutating into a Noah character who goes as far as building an ark in his front yard.

43 Actor Hawke and others : ETHANS

Ethan Hawke is a Hollywood actor who made his breakthrough in a supporting role in “Dead Poet’s Society”, playing opposite Robin Williams. Hawke used to be married to Uma Thurman, with whom he has two children.

“The Village Voice” is a free newspaper distributed in New York City. It had a great advertising slogan in the eighties: “Some people swear by us … other people swear AT us”.

Roku is a manufacturer of digital media players that allow access to audio and video programming over the Internet that is shown on television. Roku was founded in Los Gatos, California in 2002 by Anthony Wood. Wood chose the company name “Roku” as it is the Japanese word for “six”, and Roku is the sixth company that Wood founded.