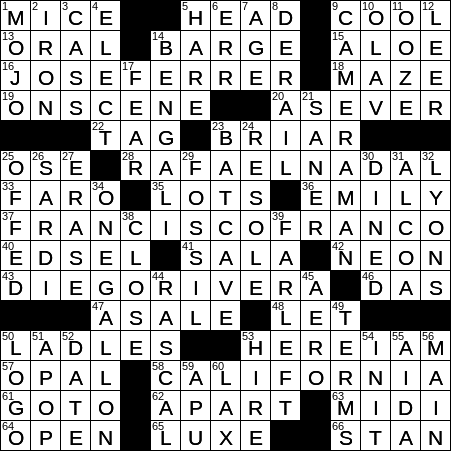 Themed answers are famous people whose first name gives a CALIFORNIA city when paired with “SAN”:

José Ferrer was a wonderful Hollywood actor from Puerto Rico. He won the Best Actor Oscar for his magnificent performance in the title role of 1950’s “Cyrano de Bergerac”. That made him the first Hispanic person to win an Academy Award. Ferrer had a couple of celebrity wives. His first wife was the German-American actress Uta Hagen. That marriage fell apart after ten years largely due to an affair that Hagen had with singer/actor Paul Robeson. Ferrer’s third wife was singer/actress Rosemary Clooney. Clooney and Ferrer actually married and divorced twice, eventually splitting up completely in 1967 over an affair that Ferre had with Stella Magee, who was to become his wife in his fifth and final marriage.

The wood of the tree heath plant is known as briar root and is extremely heat-resistant. As a result, briar root is used to make smoking pipes.

Francisco Franco was dictator of Spain from 1936 to 1975, a reign of 39 years that made him the longest-ruling dictator in the history of Europe.

Diego Rivera was a Mexican painter who was famous for his murals. His wife was the equally famous Mexican artist Frida Kahlo.

The name of the California city of San Diego dates back to 1602, when Spanish explorer Sebastián Vizcaíno named the area after the Catholic Saint Didacus. Saint Didacus was more commonly referred to as San Diego de Alcalá.

Stan Musial was a baseball player who went by the nickname “Stan the Man”, a moniker he was awarded by the Brooklyn Dodgers fans in 1946. Off the field, Stan was quite the harmonica player.

The Hare Krishna mantra dates back to the 15th century. It is a 16-word mantra that can be written as:

Bengal is a region in the northeast of the Indian subcontinent that lies at the northern end of the Bay of Bengal. Bengal is divided between the People’s Republic of Bangladesh and the Indian state of West Bengal.

17 One cause of goose bumps : FEAR

The terms “goose bumps” and “goose flesh” come from the fact that skin which is cold can look like the flesh of a plucked goose.

29 What’s left of a dinosaur : FOSSIL

31 Company with a can-do attitude? : ALCOA

32 French city with a history of silk-making : LYONS

The city of Lyon in France, is sometimes known as “Lyons” in English. Lyon is the second-largest metropolitan area in the country, after Paris. It is located just to the north of the confluence of the Rhône and Saône Rivers.

39 Liberal and then some : FAR-LEFT

Royal Dutch Shell is the fourth largest company in the world in terms of revenue (Walmart is the largest) and is headquartered in the Hague, in the Netherlands. The company was formed in 1907 with the merger of the Royal Dutch Petroleum Company and Shell Transport and Trading company of the UK. The two companies merged in order to compete globally with the biggest US oil company of the day, John D. Rockefeller’s Standard Oil. Shell Oil Company is a US-based subsidiary of Royal Dutch Shell that is headquartered in Houston, Texas.

59 “The Simpsons” character whose last name has 18 letters : APU