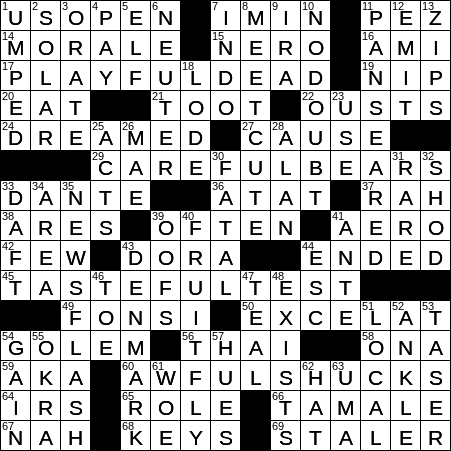 Today’s Theme (according to Bill): Ful(l) in the Middle

Themed answers are common two-word phrases, with -FUL added to the end of the first word:

The US Open is one of the oldest tennis championships in the world, having started out as the US National Championship in 1881. Today, the US Open is the last major tournament in the Grand Slam annual series, following the Australian Open, the French Open and Wimbledon.

Golf’s US Open Championship is held on the third Sunday of every June, which also happens to be Father’s Day. The first US Open was held in 1894. 36 holes were played over one day on a 9-hole course in Newport, Rhode Island.

17 Zombies with a sense of humor? : PLAYFUL DEAD (from “play dead”)

20 What to do after saying grace : EAT

33 Writer who went through hell? : DANTE

38 Greek god who fought with the mortal Hercules : ARES

Dora Maar was a famous French photographer. She became Pablo Picasso’s lover and muse, when she was 29 and Picasso 54. The pair had a complicated relationship that lasted nine years. Picasso painted a portrait of her called “Dora Maar with Cat” that was sold at auction in 2006 for almost $100 million, which at that time was the second-highest price ever paid for a painting.

A stem-winder is a type of watch, one that was very desirable in days gone by. The term became associated with “excellence” over the years, and especially with a rousing speech.

Daisy Mae Scragg is a vampish woman who chases Li’l Abner, trying to goad him into marriage. This went on for 15 years in the cartoon strip until creator Al Capp succumbed to public pressure and married the couple at the end of March 1952. The marriage was such a big event that it made the cover of “Life” magazine.

Alan Shepard was the first American in space. Shepard’s flight was originally scheduled for October 1960 but a series of delays pushed it out till May 5, 1961. Yuri Gagarin made his celebrated flight on April 12, 1961, just one one month earlier, winning that part of the Space Race for the Soviets. A decade later, Shepard went into space again at the age of 47, as commander of Apollo 14. He was the fifth man to walk on the moon, and indeed the oldest. Shepard was also the only one of the Mercury Seven team to make it to the moon. Famously, he drove two golf balls while on the lunar surface.

The common fruit fly is used in biological research because it is easy to care for, it breeds very quickly, and lays lots of eggs. The average lifespan of a fruit fly in nature is about a month.

43 Nation whose flag is a white cross on a red background : DENMARK