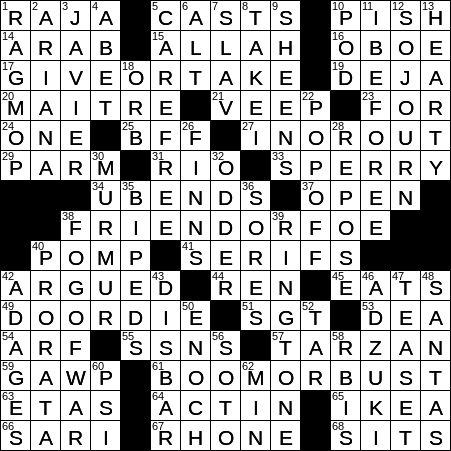 Today’s Theme (according to Bill): Word to Complete …

Themed answers are well-known phrases in the format X or Y. The elements X and Y can both complete words cited in the clue:

In French, one might learn from a “maître” (master) in “une école” (a school).

25 Person who might be chosen to be maid of honor, for short : BFF

In the world of IMs (instant messages), a BFF (best friend forever) is a VIP (very important person).

The Sperry Top-Sider is a brand of boat shoe that bears the name of company founder Paul A. Sperry. Paul was the brother of writer and illustrator Armstrong Sperry, who was noted for his historical novels set on sailing ships.

34 Fittings under the sink : U-BENDS

38 Word that can complete DE___ : FRIEND OR FOE (defriend or Defoe)

To defriend is to unfriend.

Daniel Defoe is most famous today as an author, of the novel “Robinson Crusoe” in particular. Defoe was also a trader, and a spy for King William III.

Javier Pérez de Cuéllar is a diplomat from Peru, and the man who served as the fifth Secretary-General of the United Nations. He held the office from 1982 to 1992, replacing Kurt Waldheim. Pérez de Cuéllar was succeeded by Boutros Boutro-Ghali.

Charlie Sheen’s real name is Carlos Irwin Estévez, and he is of course the youngest son of actor Martin Sheen. Charlie was the highest paid actor on television in 2010, earning $1.8 million per episode on the sitcom “Two and a Half Men”. Then of course he blew it and got fired from the show amid stories of alcohol and drug abuse and domestic violence. I bet his co-stars were pretty tweaked about the show being canceled, and pretty happy that it was given a second lease of life …

“I before E, except after C”, although with so many exceptions, I don’t think that this rule is taught in schools anymore …

18 Feature of the king of clubs : ORB

The king of clubs in a pack of playing cards is said to represent Alexander the Great.

Someone is described as Nordic if he or she is a native of Norway, Denmark, Sweden, Finland or Iceland.

The word “stethoscope” comes from the Greek word for “chest examination”. The stethoscope was invented back in 1816 in France by René Laennec, although back then it looked just like an ear trumpet, a wooden tube with flared ends.

There are two Enoch’s mentioned in the Bible. One was Enoch the son of Cain, and grandson of Adam. The second was Enoch the great-grandfather of Noah, and father of Methuselah.