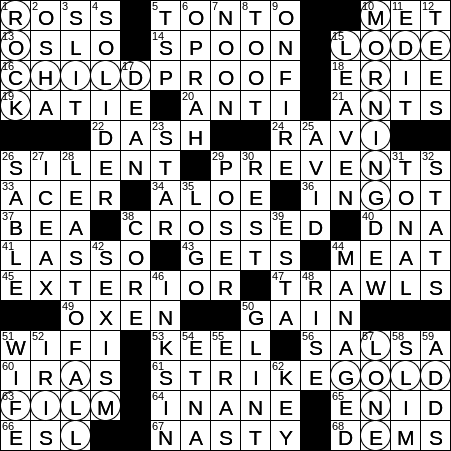 Circled letters in the grid are types of STAR. Those STARS come in pairs that CROSS each other:

1 Diana who led the Supremes : ROSS

The nursery rhyme “Hey Diddle Diddle” has been around at least since the mid-1700s.

Hey diddle diddle,
The cat and the fiddle,
The cow jumped over the moon,
The little dog laughed to see such fun,
And the dish ran away with the spoon.

“Lodestar” is a term rarely used now, and describes a bright star that’s used for navigation purposes. The most famous would be Polaris, the Pole Star, which is very close to true north. The name lodestar comes from the days of early compasses when a naturally magnetic stone was used to detect magnetic north. These stones were called lodestones.

19 Ledecky who has been named World Swimmer of the Year five times : KATIE

24 Shankar with a sitar : RAVI

65 Oklahoma city named for an “Idylls of the King” woman : ENID

15 Cause to expand, as bread : LEAVEN

“¿Cómo está usted?” is the more formal way of asking “How are you?” in Spanish.

52 Flower named for a goddess : IRIS