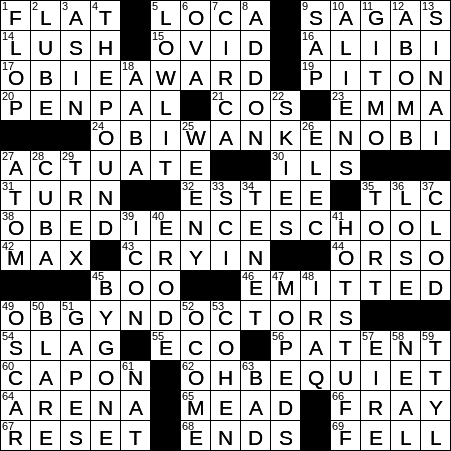 Today’s Theme (according to Bill): Oh, Bea Is Heard First

Themed answers each start with an “OB” sound:

If we’re talking the Ricky Martin song, then I think he capitalizes the “La” in the title …

“Ars amatoria” (“The Art of Love” in English) is a series of poems in three books by the Roman poet Ovid. Book one provides men with instruction on how to find a woman. Book two gives a man guidance on keeping that woman. Ovid turns the tables in Book three and gives advice to women on how to find and keep a man.

16 Story that lets you off the hook : ALIBI

35 Little extra attention, as from a repairer, for short : TLC

“Mad Max” is a series of Australian movies starring Mel Gibson in the title role. Well, Gibson plays the lead in the first three films (“Mad Max”, “The Road Warrior” and “Beyond Thunderdome”) and Tom Hardy plays Max in the fourth movie, “Fury Road”.

18 Rhyme scheme of Robert Frost’s “Stopping by Woods on a Snowy Evening” : AABA

When I was a schoolkid back in Ireland, Robert Frost’s “Stopping by Woods on a Snowy Evening” was our first introduction to American poetry, and what a lovely introduction it was:

Quarks are elementary atomic particles that combine to make composite particles called “hadrons”. I’m really only familiar with the really stable hadrons i.e. protons and neutrons. There are six types of quarks (referred to as “flavors”). These flavors are up, down, strange, charm, bottom and top. The term “quark” was borrowed from James Joyce’s book “Finnegans Wake”, by physicist Murray Gell-Mann. However, the word coined by Joyce is pronounced “kwark”, and the particle’s name is pronounced “kwork”.

The word “moped” was coined in 1952 by a Swedish journalist named Harald Nielsen. The term is a portmanteau of “motor” and “pedal”.

49 One of five for composer John Williams : OSCAR

63 Deserving to get gonged : BAD

NBC’s “The Gong Show” was originally broadcast in the seventies and eighties, but it always seems to be showing somewhere on cable TV. I suppose the show was a forerunner of today’s “America’s Got Talent”, in that it was a talent show in which the acts can be cut off in mid-performance by the sounding of a gong (just like the 3 buzzers on “Talent”). Despite all the terrible acts that appeared, some famous names made it after the show e.g. Boxcar Willie, Paul Reubens (Pee Wee Herman) and Andrea McArdle (played “Annie” on Broadway).