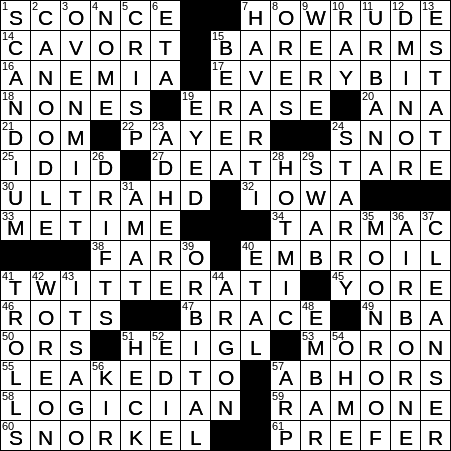 The Iowa Native American people are a Siouan nation. The Iowa speak the Chiwere language, along with the Missouria and Otoe tribes.

34 Frustrating place to be stranded : TARMAC

38 Gambling card game that up to 10 may comfortably play at once : FARO

A brace is a pair, as in a brace of game birds that have been killed for sport.

One might find a medical doctor (MD) in an operating room (OR).

The Ramones were an American punk rock band. The group formed in Forest Hills, New York in the mid-seventies. The band members took on the stage names Dee Dee, Joey, and Johnny Ramone, even though they were not related. Arguably, the Ramones were the first punk rock group, defining the genre. Something else that’s not my cup of tea …

That would be a school of fish.

“To canoodle” is to indulge in caresses and kisses.

The city of Berea mentioned in the Christian Bible in the Acts of the Apostles is known today as Veria. Veria is in modern-day Greece.

In Internet terms, a troll is someone who attempts to disrupt online group activities. The fishing term “troll” is used to describe such a person as he or she throws out off-topic remarks in an attempt to “lure” others into some emotional response. Sad, sad people …

“To embar” is to hinder or stop, to perhaps hinder with a bar. The related term “embargo” describes the action of barring vessels from entering or leaving a nation’s ports.

57 One of the first artists to incorporate random chance : ARP