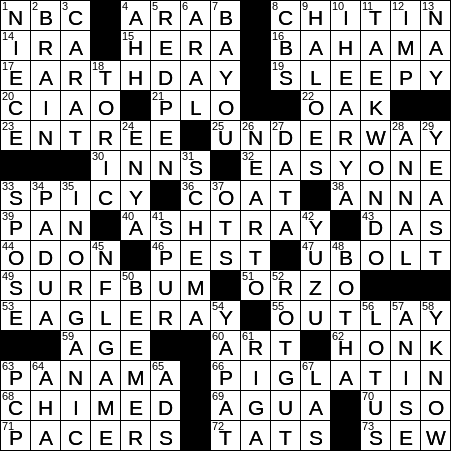 Themed answers appear to be common phrases, but are actually PIG LATIN terms reflecting the clue:

NBC’s “Today” show first aired way back in 1952 when it was the first “morning show” in the world. The first host of “Today” was Dave Garroway.

14 Something to roll over, for short : IRA

A rollover IRA is a subtype of traditional Individual Retirement Account (IRA). The funds for a rollover IRA come from another qualified plan such as a 401(k) or 403(b) account.

33 High on the Scoville scale : SPICY

Anna Sui is a fashion designer from Detroit, Michigan.

66 “Language” that explains the answers to the six starred clues : PIG LATIN

69 Eau, across the Pyrenees : AGUA

The Indiana Pacers are the professional basketball team based in Indianapolis, who play in the NBA. The name was chosen when the team was formed in 1967. “Pacers” is a homage to harness racing pacers (famed in Indiana) and the pace car used in the Indianapolis 500.

7 Habitat for alligators and crawdads : BAYOU

27 It may be roaming overseas : DATA

Stick to Wi-Fi when overseas …

28 Record of a single year : ANNAL

34 “The Taming of the Shrew” setting : PADUA

Yuzu is a citrus plant and fruit that is native to East Asia. The flavor of the yuzu fruit is said to resemble that of a grapefruit, with a hint of mandarin orange.

The New York Giants (NYG) football team play their home games in MetLife Stadium in East Rutherford, New Jersey, a stadium shared with the New York Jets (NYJ). The Giants are the only team remaining from a group of five that joined the league in 1925. For many years, the Giants shared team names with the New York Giants MLB team, before the baseball franchise moved to San Francisco after the 1957 season.

The lotus-eaters were a race of people who featured in Greek mythology. The lotus flowers and fruits that were consumed were supposedly narcotic and addictive, and so the lotus-eaters enjoyed a life largely asleep in peaceful apathy.

Absinthe is an alcoholic spirit that is distilled from various plants and herbs, including wormwood. Absinthe was banned in the US in 1915 as it was deemed to be an addictive psychoactive drug. However, the accepted opinion today seems to be that absinthe is no more addictive or dangerous than any other spirit.

Back in the 1800s, the Las Vegas Valley was given its name from the extensive meadows (“las vegas” is Spanish for “the meadows”) present in the area courtesy of the artesian wells drilled by local farmers. Las Vegas was incorporated as a city in 1905, in the days when it was a stopping-off point for pioneers travelling west. It eventually became a railroad town, although with the coming of the railroad growth halted as travelers began to bypass Las Vegas. The city’s tourism industry took off in 1935 with the completion of the nearby Hoover Dam, which is still a popular attraction. Then gambling was legalized, and things really started to move. Vegas was picked, largely by celebrated figures in “the mob”, as a convenient location across the California/Nevada state line that could service the vast population of Los Angeles. As a result, Las Vegas is the most populous US city founded in the 20th century (Chicago is the most populous city founded in the 19th century, just in case you were wondering).