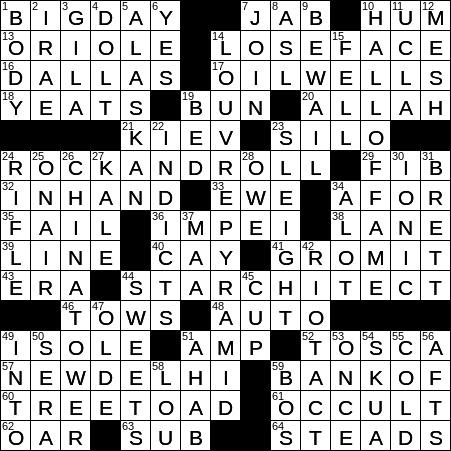 Themed answers all relate to famed architect I. M. Pei, who passed away in May of 2019:

20 Omnipotent and all-merciful one, in Islam : ALLAH

Chicken Kiev may indeed be a Ukrainian dish, one named for the capital city of Kiev. It is a boneless chicken breast rolled around garlic, herbs and butter, breaded and deep fried. It was my Dad’s favorite …

Apparently the phrase “E for effort” originated as a WWII campaign in the US to help boost productivity in factories. Over time, the phrase has been misconstrued as “A for effort”, apparently assuming that we’re talking about grades.

44 Portmanteau for 36-Across : STARCHITECT

A star architect might be referred to as a “starchitect”.

In Italian, “Sicilia” (Sicily) and “Sardegna” (Sardinia) are “isole” (islands).

52 Classic opera in which every leading character dies : TOSCA

The Bank of China Tower (often “BOC Tower”) is a spectacular structure in Hong Kong that was designed by I. M. Pei. Opened in 1990, the BOC Tower was the tallest building in Hong Kong at that time, and was also the first building constructed outside of North America to reach a height of over 1,000 feet.

3 River to the Colorado : GILA

5 One who calls Nome home : ALASKAN

Nome, Alaska has over 3,500 residents, the majority of whom are Native American. The next largest ethnic group in Nome is the white population. The origin of the name “Nome” isn’t well understood, it seems. One theory is that was a misunderstanding of the local Inupiaq word meaning “Where at?”

When I. M. Pei became the first foreign architect to work on the Louvre in Paris, he not only designed the famous glass and steel pyramid, but also worked on renovations throughout the museum. His design was very controversial, causing a lot of ill feeling among the public. Eventually, when the work was complete, public opinion became more favorable. Personally, I think it is magnificent, both inside and out.

George Brett played his entire professional baseball career with the Kansas City Royals. Brett made more hits than any other third baseman in Major League history.

Blood serum (plural “sera”) is the clear, yellowish part of blood i.e. that part which is neither a blood cell or a clotting factor. Included in blood serum are antibodies, the proteins that are central to our immune system. Blood serum from animals that have immunity to a particular disease can be transferred to another individual, hence providing that second individual with some level of immunity. Blood serum used to pass on immunity can be called “antiserum”.

Skuas are a group of about seven species of seabird. Some of these species are known as jaegers in the Americas. The skua takes its name from the island of Skúvoy in the Faroe Islands in the North Atlantic. The name “jaeger” comes from the German word for “hunter”.

59 Winner of four World Series in this century, on scoreboards : BOS