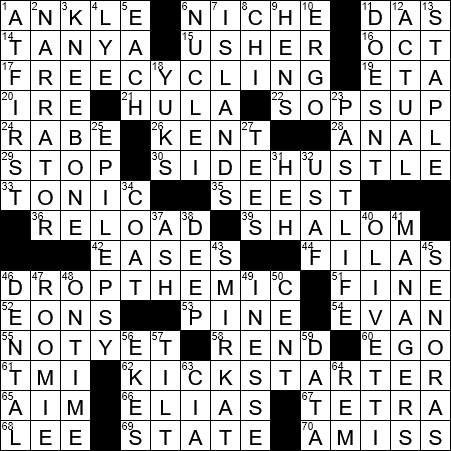 Constructed by: Thomas van Geel
Edited by: Will Shortz

Themed answers each START with a kind of “KICK”:

1. Joint that a sock covers : ANKLE

The discovery of the New World by Christopher Columbus is celebrated with a national holiday in many countries. Here in the US we have Columbus Day, in the Bahamas there is Discovery Day, and in Uruguay there is the Day of the Americas.

30. Extra job in the gig economy : SIDE HUSTLE (giving “sidekick”)

The original tonic water was a fairly strong solution of the drug quinine dissolved in carbonated water. It was used in tropical areas in South Asia and Africa where malaria is rampant. The quinine has a prophylactic effect against the disease, and was formulated as “tonic water” so that it could be easily distributed. In British colonial India, the colonial types got into the habit of mixing in gin with the tonic water to make it more palatable by hiding the bitter taste of the quinine. Nowadays, the level of quinine in tonic water has been dropped, and sugar has been added.

61. Reaction to an overshare : TMI

69. What a star on the American flag represents : STATE

2. Holden Caulfield, for “The Catcher in the Rye” : NARRATOR

The Greek letter “chi” is the one that looks like our letter X.

The term “rooster” dates back to the late 1700s, and is used to describe an adult male chicken, primarily here in the US. The word “rooster” originated as an alternative to “cock”, as puritans objected to the association with the slang usage of the latter term.

27. Bagful carried by a caddie : TEES

The B-52 Stratofortress has been a mainstay of the USAF since its introduction in 1955. The stated intention is to keep the B-52 in service until 2045, which would give a remarkable length of service of over 90 years.

The Latin term “in esse” is used to mean “actually existing”, and translates as “in being”.

R.E.M. was a rock band from Athens, Georgia formed in 1980. Apparently, the name “R.E.M.” was chosen randomly from a dictionary.