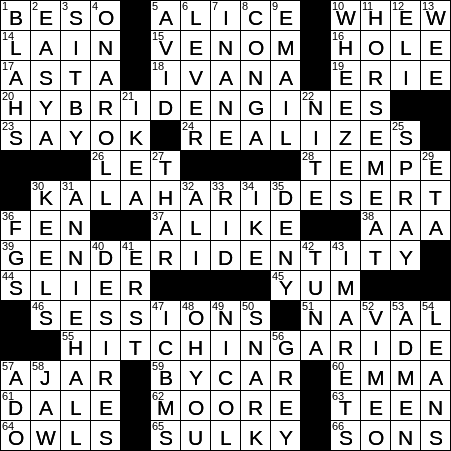 Themed answers include “RIDE” as a hidden word:

Outrageous rock singer Alice Cooper’s real name is Vincent Furnier. “Alice Cooper” was originally the name of the band that Furnier fronted, but he adopted the name as his own when he started his solo career in 1975. Outside the recording studio, Cooper is an exceptional golfer. He has stated that golf was a great help to him as he overcame addiction to drugs and alcohol.

Asta is the wonderful little dog in the superb “The Thin Man” series of films starring William Powell and Myrna Loy (as Nick and Nora Charles). In the original story by Dashiell Hammett, Asta was a female Schnauzer, but on screen Asta was played by a wire-haired fox terrier called “Skippy”. Skippy was also the dog in “Bringing up Baby” with Cary Grant and Katharine Hepburn, the one who kept stealing the dinosaur bone. Skippy retired in 1939, so Asta was played by other dogs in the remainder of “The Thin Man” films.

The city of Scottsdale in Arizona is part of the Greater Phoenix Area. It was established in the late 1880s as Orangedale, with the name referring to the large citrus groves planted by the ex-US Army Chaplain Winfield Scott. Orangedale was renamed to Scottsdale in 1894, in honor of the founder. The city’s official nickname is “The West’s Most Western Town”.

The Kalahari is a vast desert region in southern Africa that covers much of Botswana, and parts of Namibia and South Africa. The desert is located within a larger lowland known as the Kalahari Basin, which covers almost a million square miles. The name “Kalahari” comes from one of two Tswana words, meaning either “the great thirst” or “a waterless place”.

Jeff Sessions is a politician from Alabama who served as US Attorney-General in Trump administration from 2017 to 2018. Born in Selma, Alabama, his full name is Jefferson Beauregard Sessions III. He was named after his grandfather, who in turn was named after the president of the Confederate State Jefferson Davis, and after Confederate General Pierre-Gustave Toutant de Beauregard.

“Twixt” is a shortened form of “betwixt”, meaning “between, among”.

I suppose if there is any Woody Allen movie that I enjoy watching, it’s “Annie Hall” from 1977. I think Diane Keaton is a great actress and she is wonderful in this film. You’ll see Paul Simon as well, making a rare movie appearance, and even Truman Capote playing himself. The film is also famous for sparking a movement in the fashion world to adopt the “Annie Hall” look, that very distinctive appearance championed by Diane Keaton as the Annie Hall character.

47. Parts of a Cold War arsenal, for short : ICBMS