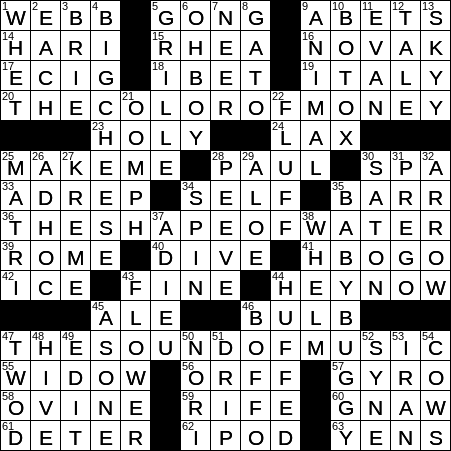 Constructed by: Jim Hilger
Edited by: Will Shortz

Today’s Theme (according to Bill): The Title of Films

Themed answers are movie titles in the format “THE xxxxx OF xxxxx”, and each has a “punny” clue:

Jack Webb played Sergeant Joe Friday on “Dragnet” on both TV and radio … and what a voice he had! Off the screen, Webb was a lover of jazz, and he played the cornet. It was within the world of jazz that he met and fell in love with Julie London, the famous singer with “the smoky voice”. The couple married and had two kids together.

5. Percussion in a pagoda : GONG

Mata Hari was the stage name used by Margaretha Geertruida Zella, born in the Netherlands in 1876. After an unsuccessful and somewhat tragic marriage, Zella moved to Paris in 1903 where she struggled to make a living. By 1905 she was working as an exotic dancer and using the name Mata Hari. She was a successful courtesan, notably moving in various circles of high-ranking military officers. She apparently worked as a double agent, both for the French and the Germans. When Mata Hari was accused by the French of passing information to the enemy, she was tried, found guilty and executed by firing squad at the height of WW1, in 1917.

Rhea Perlman’s most famous role has to be Carla Tortelli, the irascible waitress in the long-running sitcom “Cheers”. Perlman is also a successful children’s author, and has published a series of six books called “Otto Undercover”. She is married to Hollywood actor Danny DeVito, and has been so since 1982.

Novak Djokovic is a Serbian tennis player and former world No. 1 ranked player. Djokovic is quite the character on and off the court, earning him the nickname “Djoker”. He is also very popular on the talk-show circuit, all around the world. It helps that Djokovic is fluent in several languages.

“The Color of Money” is a 1986 Martin Scorsese film starring Paul Newman as pool hustler Fast Eddie Felson. Newman co-stars with Tom Cruise and Mary Elizabeth Mastrantonio. Prior to this particular film, Newman had been nominated for an Oscar eight times without winning. It was “The Color of Money” that finally earned him his Best Actor Academy Award. Newman was reprising the Fast Eddie role that he played in 1961’s “The Hustler”.

The comedian Roseanne Barr is perhaps best known as the star of her own sitcom called “Roseanne” in which she played the character Roseanne Conner. The original cast of “Roseanne” is scheduled to return for a revival of the series in 2018. In 2012 Barr unsuccessfully vied for the Green Party’s nomination for US President. She didn’t give up though, and was successful in winning the nomination of the Peace and Freedom Party. In the 2012 presidential election she earned over 60,000 votes, and placed sixth in the list of candidates.

The HBO Go offering is a “TV Everywhere” service, meaning that paid subscribers can stream content on a choice of platforms just by entering a username and password.

“Carmina Burana” is a cantata by Carl Orff based on a collection of medieval poems that go by the same name. The name translates as “Songs from Beuern”. The best known movement of the cantata by far is the dramatic “O Fortuna” used at the opening and closing of the piece. One study placed “O Fortuna” as the most often played piece of classical music in the UK over the past 75 years, largely due to its use in television commercials. Famously, the piece appeared in the US in ads for Gatorade and Old Spice aftershave.

The phrase “never the twain shall meet” originated in a Rudyard Kipling poem from 1892. The full quotation is:

Oh, East is East, and West is West, and never the twain shall meet.

Kipling’s reference here is to the British (the “West”) and the people of India (the “East”), and the lack of understanding that existed between the two in the days of the Raj.

9. Neither vegetable nor mineral, in a guessing game : ANIMAL

The parlor game called Twenty Questions originated in the US and really took off in the late forties as it became a weekly quiz show on the radio. Am I the only one who thinks that there aren’t enough quiz shows on the radio these days? I have to resort to listening to the BBC game shows over the Internet …

26. Like a committee formed for a special purpose : AD HOC

The Krispy Kreme chain of doughnut stores was founded in 1937 in Winston-Salem, North Carolina. The company introduced the Whole Wheat Glazed doughnut in 2007, great for folks looking to eat a healthy diet, I am sure …

Bolognese sauce is a meat-based sauce originating from Bologna in Italy, hence the name. The recipe is usually referred to as “ragù alla bolognese” in Italian, or simply “ragù”. Note that the Ragú brand of sauces introduced in North America in 1937 takes its name from the same source (pun … sauce!). However, the brand name uses the wrong accent (“Ragú” instead of “Ragù”), which drives a pedant like me crazy ..

Another word used in the UK that’s rarely used over here is “pram”, which in my day was the most common term for what is called a baby carriage in the US. “Pram” is short for “perambulator”.

“Boffo” is show biz slang for “very successful”, and is a term that dates back to the early sixties.

54. Anthropomorphic figures in many “Far Side” cartoons : COWS