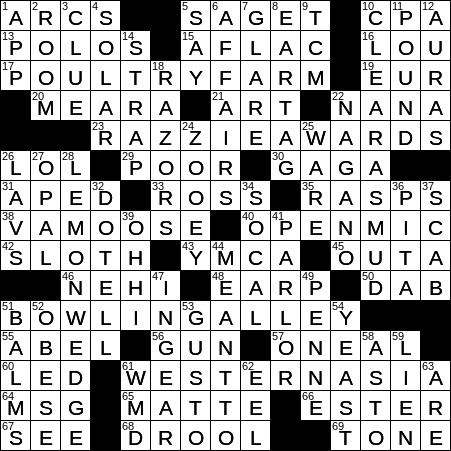 Themed clues are all the same, i.e. “Turkey’s place”.

15. Company with a spokesduck : AFLAC

42. One of the seven deadly sins : SLOTH

The YMCA (the “Y”) is a worldwide movement that has its roots in London, England. There, in 1844, the Young Men’s Christian Association (YMCA) was founded with the intent of promoting Christian principles through the development of “a healthy spirit, mind and body”. The founder, George Williams, saw the need to create YMCA facilities for young men who were flocking to the cities as the Industrial Revolution flourished. He saw that these men were frequenting taverns and brothels, and wanted to offer a more wholesome alternative.

In bowling, consecutive strikes are named:

55. One of three biblical brothers : ABEL

Turkey is a country that straddles the border between the continents of Europe and Asia. Even though most of Turkey lies geographically in Asia, in recent decades the country has been strengthening its ties with its European neighbors. Turkey is a member of NATO, and is well on the way to becoming a member of the European Union.

A male might shave to remove his five o’clock shadow.

The distilled beverage we call “vodka” takes its name from the Slavic word “voda” meaning “water”, with “vodka” translating as “little water”.

54. What Vegemite ultimately comes from : YEAST

Vegemite is a spread made from spiced-up brewers’ yeast extract. I’m told that it resembles Marmite, a spread that I used to eat as a kid back in Ireland. I’m also told that Vegemite has a flavor similar to beef bouillon.