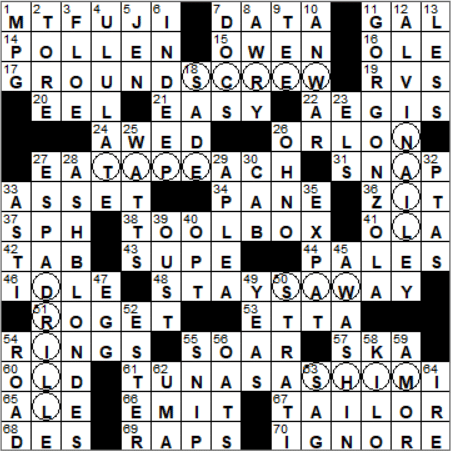 Themed answers include the names of TOOLS as hidden words, which are spelled out in circled letters in the grid:

Mount Fuji is Japan’s highest and most famous mountain. It is an active volcano situated just west of Tokyo.

The pollen of ragweed is the greatest allergen of all pollens. It seems that the pollen season has been lengthening in recent years, probably due to global warming.

Someone is said to be under the aegis (also “egis”) of someone else (for example) if that other person provides protection, or perhaps sponsorship. The word “aegis” comes from the Greek word for a goat (“aigis”), the idea being that the goatskin shield or breastplate worn by Zeus or Athena, gave some measure of protection.

33. Opposite of a liability : ASSET

Our word “asset”, meaning “owned item of value”, is actually an artificial singular that arose in the 1800s from the collective noun “assets”. “Assets” came from Anglo-French ”assetz”, with both terms originally used as adverbs meaning “sufficient estate to cover liabilities”.

Payola is the illegal practice of paying radio stations or disk jockeys to repeatedly play a particular piece of music.

When we run a tab at a bar say, we are running a “tabulation”, a listing of what we owe. Such a use of “tab” is American slang that originated in the 1880s.

51. Peter who compiled a book of synonyms : ROGET

54. The Audi symbol has four of them : RINGS

The musical style known as calypso originated in Trinidad and Tobago, but there seems to be some debate about which influences were most important as the genre developed. It is generally agreed that the music was imported by African slaves from their homeland, but others emphasize influences of the medieval French troubadours. To me it sounds more African in nature. Calypso reached the masses when it was first recorded in 1912, and it spread around the world in the thirties and forties. It reached its pinnacle with the release of the famous “Banana Boat Song” by Harry Belafonte.

A ululation is a high-pitched trill, a sound usually practiced by women in ritual situations. I came across the practice not too long ago as an expression of celebration at an Arab-American wedding.

Jennifer Aniston won a 2002 Emmy for playing Rachel on the great sitcom “Friends”. Jennifer’s parents are both actors, and her godfather is the actor Telly Savalas.

Doctors (docs) might be found working in emergency rooms (ERs).

Gorgonzola is an Italian blue cheese that bears the name of the town in Lombardy in which it originated.

Stratus clouds (plural “strati”) are very common, and as they are wider than they are tall and flat along the bottom, we might just see them as haze in a featureless sky above us. Stratus clouds are basically the same as fog, but above the ground. Indeed, many stratus clouds are formed when morning fog lifts into the air as the ground heats up.

The Abbey Road Studios in London was a large Georgian townhouse built in the 1830s. It became a recording studio in 1931, and you can even see some YouTube video showing Sir Edward Elgar back then making recordings with the London symphony Orchestra. The studios passed through various owners and by the time the Beatles started their famous recording it was known as EMI Studios. The Beatles recorded practically all of their albums there, between 1962 and 1970. Famously they named a 1969 album after the studio, “Abbey Road”. That’s the one with the cover showing the Fab Four crossing the “zebra crossing” outside the studio.

Honey Bunches of Oats is a breakfast cereal made by Post Foods.