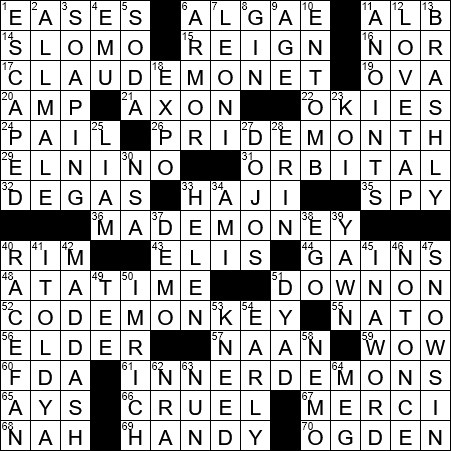 The Dust Bowl was the name given to a period in which severe dust storms ravaged the American and Canadian Prairies in the thirties. A major factor in the storms was the loss of the deep-rooted grasses native to the land that had been displaced by intensive farming. Without the grasses, the topsoil was blown away in a period of drought.

40. Place for salt on a margarita glass : RIM

Chippendales is a big touring operation featuring exotic male dancers. The original Chippendales was a nightclub in Los Angeles in the early eighties. The establishment’s name was inspired by the Chippendale-style furniture used in the club.

3. Marking, as windows on Halloween : SOAPING

The prank known as “soaping windows” involves writing or drawing designs on windows using bar soap. I hear that it’s a real chore to get the soap off the window afterwards …

Téa Leoni is an American actress. One of Leoni’s early parts was in the great film “A League of Their Own” (a minor role, Racine at first base). She also played the fiancée of Sam Malone from “Cheers” on the spin-off sitcom “Frasier”. A leading role on the big screen was opposite Adam Sandler in “Spanglish”. My favorite of her more prominent movie roles was as Jane in “Fun with Dick and Jane”. Leoni started playing the title role in the drama series “Madam Secretary” in 2014, and that’s a show I really enjoy …

Irish actor Liam Neeson got his big break when he played Oskar Schindler in the Spielberg epic, “Schindler’s List”. Neeson was in the news a few years ago when he lost his wife, actress Natasha Richardson, in a tragic skiing accident in 2009.

The Powerball lottery game is available in most states of the US, as is its major rival called Mega Millions.

In the 1954 movie version of “20,000 Leagues Under the Sea”, Captain Nemo goes down with his ship. In the novel by Jules Verne the fate of Nemo and his crew isn’t quite so cut and dry, although the inference is perhaps that they did indeed head for Davy Jones’ Locker.

Meg Ryan is the stage name of the actress Margaret Mary Hyra. Ryan’s big break came with the excellent 1989 movie “When Harry Met Sally”, from which she went on to star in some of the greatest romantic comedies ever made.